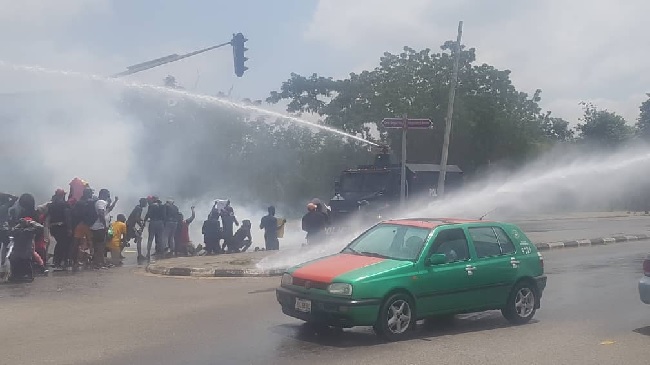 Armed Police personnel, on Sunday, dispersed hundreds of protesters against the Special Anti-Robbery Squad, SARS Unit of the Nigeria Police Force with hot water and tear gas in their attempt to resume their ongoing nationwide protest against the Squad.

Eyes witnesses said that the gun welding Police Personnel also condoned off the Force Headquarters which led to the disruption of Vehicular and human movements within the area.

It was gathered that policemen on sighting the protesters approached them, shooting at them with hot water from a water cannon and teargas while the protesters scampered for safety.

However, a few hours after the face-off between the protesters and the Police, the IGP Summoned a World Press Conference in which he announced the formal dissolution of SARS Nationwide

The Protesters at the Force Headquarters before being scattered demanded that everyone arrested for their participation in the protest nationwide must be released.

It was gathered that some of the protesters were arrested while a number of them sustained injuries.