#EndSARS: How report warned Nigeria about protests fueled by COVID-19

• Warning signs have always been there for Nigerian govt —Amnesty International

Following the widespread #EndSARS protests that ravaged many states in Nigeria, IFEDAYO OGUNYEMI writes on an analysis that predicted the rise of these protests as fuelled by the economic impact of COVID-19. 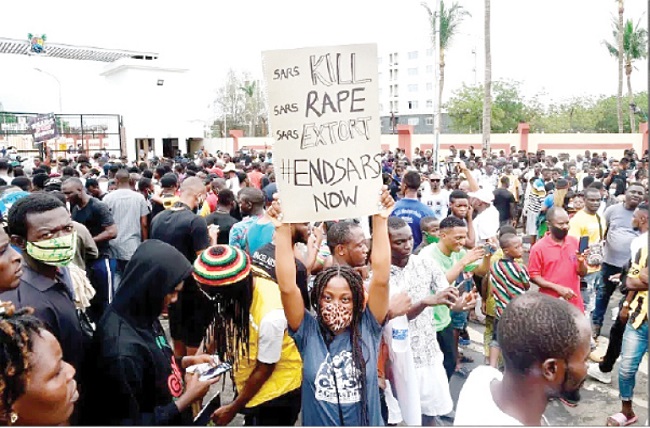 A July 2020 report by global risk firm, Verisk Maplecroft warned Nigeria of impending unrests and protests fuelled by the economic impact of COVID-19 but based on existing grievances.

The analysis which was published by UK Guardian on July 17 noted that the economic impact of COVID-19 would drive civil unrest and in the second half of the year in 37 countries including Nigeria, Iran, Bangladesh, Algeria and Ethiopia which were listed as the highest risk countries facing “a perfect storm” of popular anger.

It specifically noted that the impact of COVID-19 is a “tinderbox” that could drive unparalleled street protests in African and Latin American countries for up to three years, warning also that the risk of unrest in countries such as India, Brazil, Russia, South Africa, Indonesia and Turkey are only slightly less acute but will still constitute a threat to stability.

According to the report, growing food insecurity is stoking anger in Nigeria and DR Congo. “Although rice production in Nigeria is increasing, it is still insufficient to feed Africa’s most populous country. Lagos has seen food prices rise by up to 50% in recent months and it’s a similar picture in DR Congo, where the rising cost of staples has led to unrest in Kinshasa and other cities, including the mining hub of Lubumbashi,” the report said.

It added that: “In the most vulnerable states, from Chile to DR Congo, Nigeria and beyond, the ranks of protesters marching against long-standing grievances will likely swell with millions of newly unemployed, underpaid and underfed citizens, posing a risk to domestic stability with few parallels in recent decades.”

While data provided by Armed Conflict Location and Event Data (ACLED), an NGO which tracks fatalities and other data showed that civil unrest reduced in March at a time when most countries of the world instituted lockdowns and restrictions of movement as part of efforts to contain the spread of COVID-19, Miha Hribernik, Verisk Maplecroft’s principal analyst in the July report said the total number of protests in developing countries has almost rebounded to pre-pandemic levels, as long-standing grievances over socioeconomic inequalities, civil and political rights, and government corruption have resurfaced.

“With many countries still in lockdown and the full economic shock of the outbreak yet to be felt, we expect the number of protests to surge over the next 2–3 months.

“It’s a tinderbox. It doesn’t take as much as it did a year ago. We can see that as the lockdown started the vast majority of the protests were COVID related. We had food protests in Manila and protests in Bangladesh over the garment industries.

“Our base case from January – that 2020 will see a surge in protests and that the coming decade is set to be a one of unprecedented unrest – still stands, but in the countries least prepared to bounce back from the pandemic, it now looks like a best-case scenario.”

As predicted, nationwide protests were organised in Nigeria about three months after the report. The protests which were based on existing grievances called for an end to police brutality, the abolition of the dreaded Special Anti-Robbery Squad (SARS) unit of the Nigeria Police Force as well as police reforms.

#EndSARS started as a social movement which calls for an end to police brutality in Nigeria. The movement demanded an end to the dreaded SARS unit of the following long-record of alleged atrocities on young Nigerians committed by officers attached to the unit.

Among these atrocities are several human rights violations including illegal “stop and searches”, illegal arrests and detentions, extrajudicial killings, sexual harassment of women and brutalising many young Nigerians. Many of the isolated but connected incidents were recorded and posted on social media. This led to the protests in 2017 led by Segun Awosanya (Segalink).

But in 2020, there was another wave of the #EndSARS movement just as Nigeria was gradually coming out from the shackles and onslaught of COVID-19 impact and restrictions. A trending video showed a young Nigerian reportedly killed in Ughelli, Delta State on Saturday, October 3, 2020, while SARS officers made away with his vehicle.

Several other videos in other states also resurfaced on Twitter as young Nigerians publicly decried the spate of killings and human rights violations perpetrated by SARS officers. Soon after, physical and public protests began on Thursday, October 8, 2020, and continued for more than two weeks. During these protests, several other young Nigerians lost their lives including Jimoh Isiaka, a by-stander in Ogbomosho, Oyo State and more notably, the Lekki Killings of Tuesday, October 22 at the Lekki Toll Plaza where young Nigerians were killed while raising Nigerian flags and chorusing the national anthem.

But did Nigerian govt heed warning of civil unrests and protests?

Nigeria Country Director of Amnesty International, Osai Ojigho, told Saturday Tribune that the warning signs have always been there for the Nigerian government to work on, adding that, “looking at all of these reports, Nigeria should have done a lot more. For a long time, people have asked for transparency in the budget (federal and state). Without information, people cannot advise clearly where things should go.” 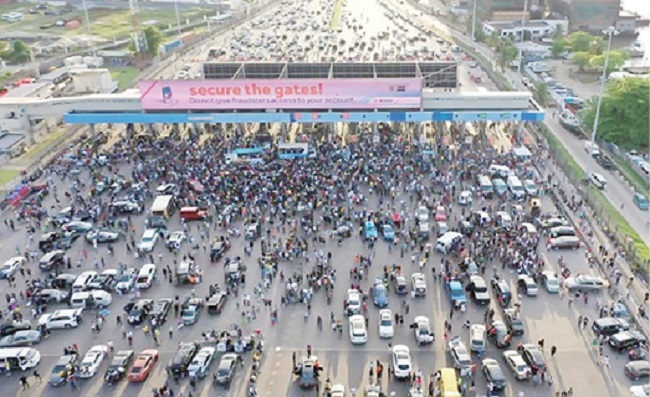 When asked if government regards projections and analyses made by foreign organisations as important, Ojigho said: “The responses dismissive and that is unfortunate. I think about two years ago when there was a report that Nigeria has now overtaken India as the country with the largest number of people living in extreme poverty, Nigeria ministers came out to say it’s not true. Rather they should take time to look at the charts and the recommendations these organisations and their think-tanks provide. I’m not saying they should take everything hook, line and sinker but they should gather all of these information because they’ve been provided by experts in their fields and then use that information in decision making, it›s not right when they dismiss them outrightly but at least, they can view it, look into it, ask questions to see how they can help them make better decisions.”

On how the protests turned out to be violent, the country director said: “I think the narrative is more than the protests were hijacked. The protest went all fine and I think we need to define it correctly. Nobody hijacked the protests. When the protest started, the youth conducted themselves very well until they were disrupted by those who didn’t want them on the streets. Whether it is the security agents or the thugs and their aim was to disrupt the protests.”

Similarly, Action Aid’s manager of social mobilisation in Nigeria, Adewale Adeduntan told Saturday Tribune that: “In the first, place we did not need to wait for the UK Guardian projections to know that the aftermath of COVID-19 would be unpleasant. We ought to have had a think-tank that would have deliberated and incubated a kind of home-grown national response to the fallout of the pandemic through a robust scenario building. That would have been a huge knowledge product from Nigeria that other nations could reference. But I am not sure that happened in any way. The point I am making is that since we could not generate such projections in-country, we should have paid high premium on the submissions published by the tabloid because largely they are scientific and data-driven thus making their margin of errors very slim as we have seen now in Nigeria and other places.”

“Regardless of the dimension the agitation may take, we still have to dialogue about the way out. Youth have to re-strategise and ensure that their demands are implemented to the letter. They must take the campaign to the digital space and ensuring that the media keep it as a major agenda for nation-building. Destroying public and private assets will not solve the problem, it will only sink more people into the abyss of poverty and also take away many people’s livelihoods.

“Government needs to restrain from the usage of brutal force especially against unarmed protesters because agitation is part of the columns bearing democracy. People must be heard in an environment not devoid of peace. Thus, lives and property must be delicately protected because uprising is an ill wind that blows no one any good.”

Deputy Director, Socio-Economic Rights & Accountability Project (SERAP), Olúwádàre A. Kóláwolé told Saturday Tribune that: “Although the ongoing protests across the country are focused primarily on combating police brutality and corruption, the protests are also a way for the people to express concerns around issues of bad governance, mismanagement, corruption and a pervasive culture of impunity and lack of respect for the rule of law.

“The pandemic and its negative economic effects on the poor and socially and economically vulnerable groups have exposed the socio-economic inequalities in Nigeria. The disparities in the standard of living of the poor and the rich have always been there, fueled by decades of neglect of critical human development sectors by successive governments that have failed over the years to pay serious attention to the provisions of Chapter II of the Nigerian 1999 Constitution. Annual budgetary allocations to poverty reduction programs and policies were confined to paper and lacklustre in its implementation.

“The Verisk Maplecroft Analysis is not without merit, given the indices of the report and the well-known pre-existing socio-economic conditions in Nigeria. In Nigeria, COVID-19 palliative measures meant to ameliorate the effects of the pandemic on citizens were grossly inadequate and implemented without transparency and accountability. The lack of commitment to ensure the rule of law, end impunity, abuse of power and police brutality on the part of government contributes to the growing trust deficit.

“The Nigerian Government, at all levels, must take decisive action to immediately address the critical issues raised by the peaceful protesters by promptly, thoroughly, impartially and transparently investigating and prosecuting individuals suspected of human rights crimes, impunity, abuse of power and police brutality over the years. The rule of law must prevail, with the government willing to obey the judgments of the court.”

Aftermath Customs’ rice raid: Our nightmare not over —Bodija traders