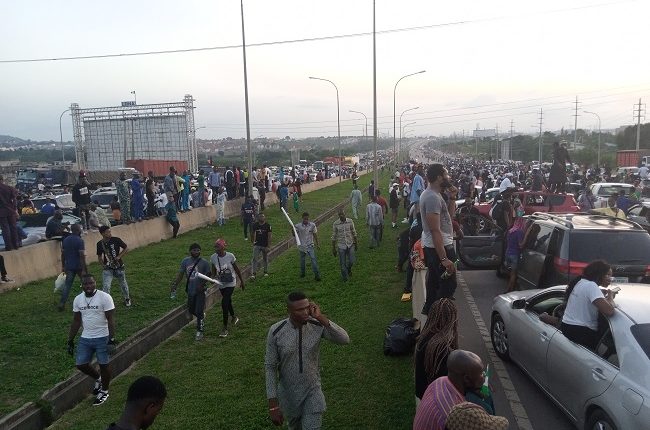 Traffic on the Outer Southern Express (OSSEX), also known as Yar ‘Adua Expressway in the Federal Capital Territory (FCT) was paralysed for about six hours on Friday as members of the #EndSARS protesters returned to the street to continue their protest demanding for good governance in all ramifications.

The #EndSARS activists began their protest on their feet and motorcade from the usual take-off point, the Unity Fountain, at the Maitama District, Abuja.

The number of protesters increased as the procession continued, many tired persons boarded and alighted from vehicles on the motorcade at various intervals to enable them to continue the protests.

Commuters from various part of the city experienced a total lockdown when the protesters took over Dantata bridge, the major interchange linking all parts of the city from the Airport road.

Many passengers who were lucky to have reached points close to their communities in the Airport road resorted to walking as they abandoned their vehicles and walked several kilometres to their various bus stops leading to their respective bus stops from which they took bikes home.

They followed the Shehu Shagari Way by the national Secretariats and branches off on Ahmadu Bello way and took possession of one lane of the Constitution Avenue which leads to the Umaru Musa Yar’Adua Way, otherwise known as Airport road.

The move, the youth said is to make many Nigerian leaders and politicians who usually jet out of the city for their respective home town miss their flights.

An official of NIWA aboard an Innoson truck with number plate 19E- 129FG attempted to beat the blockade by the motorcade at Dantata bridge announcing she had made a donation of water to the protesters in support of their move.

The youths were irked by the comment and demanded to know how much water she offered so the amount can be refunded.

They maintained that her action was typical of Nigerian privileged few who believe that with their money anything can be achieved.

They said they were not on the street to extort but to demand the correction of the entire political system so that good governance would permeate the Nigerian national life.

Aliyi Inuwa, a protester said: “Let them experience this slight discomfort and put it side by side with our experience as youth who suffer daily in one form of denial or the other.

For Amina Yahaya, one of the street protesters said the youth are interested in a wholesome reform of the Nigerian system and of particular interest are the names of those police officers who attacked and killed armless and harmless youth for no just cause.

She said the insinuation that young man wears dreadlocks does not qualify for his arrest as a criminal.

The protesters at about 1:15 pm stopped over at the Bolingo junction by Defence House using the intersection for prayers as the Muslim members observed the Jummat service.

After the prayers, the procession proceeded to the city gate where its members had lunch served by various individuals who had their booths filled with water, food and assorted drinks.

The protesters were still at the Dantata bridge as of the time of filing this report late Friday.

The All Progressives Congress (APC) has told a Federal High Court in Abuja, that the Comrade Adams Oshiomhole-led National Working Committee (NWC) was sacked to solve the internal leadership crises rocking the party…Gridlock as protesters

The party also said that immediately the Caretaker/Extraordinary Convention Planning Committee was put in place after the NWC’s dissolution, the crises that had characterised its affairs were laid to rest…Gridlock as protesters

The Emir of Zazzau, in Kaduna State, Alhaji Shehu Idris has died in his palace at the age of 84…Gridlock as protesters

[OPINION] My advice to the #EndSARS protesters