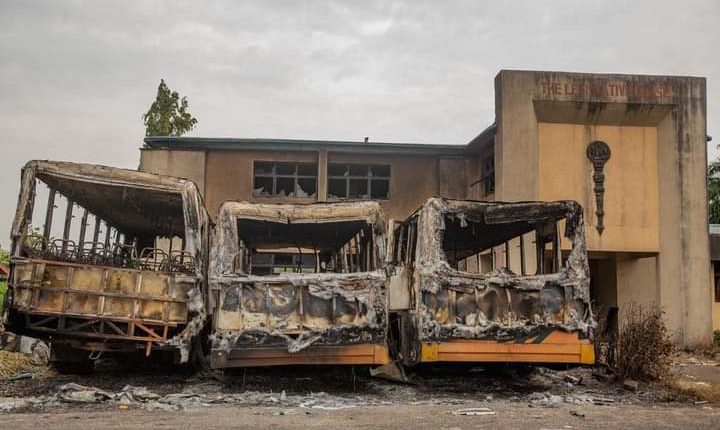 A non-governmental organization, Waterways Foundation has condemned the looting and arson of property in Okitipupa, Okitipupa local government area of Ondo following the #EndSARS protest in the state.

Recall that some hoodlums under the guise of #EndSARS protests had invaded the city to loot and raze some public property as well as the private residence of an All Progressives Congress chieftain, Ifedayo Oyedele.

They also invaded the Nigerian Correctional Centre in Okitipupa, freeing 58 prisoners in the process.

In condemning the unprecedented attacks, Barrister Femi Ogunjumelo, founder of the Foundation, in a press release made available to newsmen, said the attacks and destruction were unwarranted as there was simply no basis for it.

While throwing his weight behind the #EndSARS protests which were against police brutality and other rights infractions, Ogunjumelo, however decried the hijack of the otherwise peaceful protests, saying the hoodlums must be made to face the wrath of the law.

“No doubt, I am absolutely in support of the protests, because it was in the interest of Nigerians and even the polity. However, the violence aftermath of it was needless. I condemn the criminals who bastardized the entire process,” he said.

Going forward, Ogunjumelo called on  governemnt to begin the rebuilding process of the public property damaged by the hoodlums in Okitipupa,saying governmental activities cannot afford to stop because of some hoodlums who decided to take the law into their hands.

ALSO READ: Nigeria has been recycling people who have nothing to offer as leaders —Olafemi, ex-Kogi acting gov

He pledged that the Foundation will make generous contribution to the rebuilding process which has started.

He also commended Olu Bajowa, a retired Major General in the Nigerian Army, who has donated a four-bedroom flat for the local government to continue its functions pending when the Secretariat will be built.

General Bajowa(rtd), whose wife is the Regent of  Ayeka, one of the communities in Okitipupa, also made a donation of N5m for the rebuilding process.

[OPINION] Lagos Judicial Panel of Inquiry as a Kangaroo Contraption