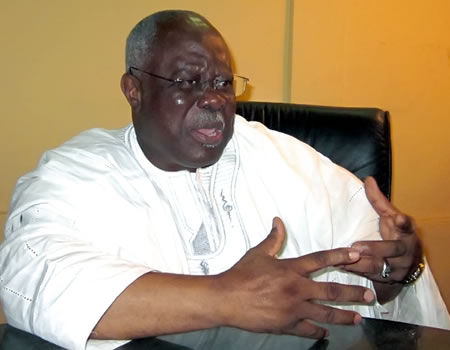 Former Deputy National Leader of Peoples Democratic Party (PDP), Chief Olabode George, has reacted to the decision to lock down Lagos with a 24- hour curfew, describing it as rather hasty, hurried and wrong.

Lagos State governor, Mr Babajide Sanwo-Olu, had on Tuesday announced the decision of the state government to impose the curfew, following prolonged protests by the Nigerian youths which he said: “has degenerated into a monster that is threatening the well-being of the society.”

Bode George kicked against the decision in a signed statement titled: “Don’t lock down Lagos,” copy of which was made available to newsmen, positing that this was not the time to provoke an already delicate issue, but a time to reflect and “for the peace of the round table.”

“The decision to lock down Lagos within a 24- hour curfew is rather hasty, hurried and wrong. This is not the time to provoke an already delicate issue. It is time to reflect. It is time for the peace of the round table,” he said.

According to the PDP chieftain, who is also the Atona of Odua of Yorubaland, the issue on ground is far beyond the narrow province of partisan concern, saying it was about the collective unity of the country nation, as well as about healing the festering sores planted by greed and the indifference of misplaced leadership.

Bode George, while lamenting massive unemployment, a widening circle of hunger and deprivation, among others in the country, enjoined President Muhammadu Buhari to galvanize all the necessary tools of statesmanship and elderly guidance to steer the angry youths towards a peaceful resolution of their legitimate grievances.

He said nobody was immune to “various national malaise” as well as the “raging poverty affecting our land,” declaring that it was not about the issue of North or South dichotomy and also not about partisan ideology but “about Nigeria.”

“This is not the issue of North or South dichotomy. It is not about partisan ideology. It is about Nigeria,” he said.

Speaking further, Chief Bode George cautioned that Lagos State, where he comes from, which
appears to be the epicentre of the protests, must avoid brinksmanship and the push towards chaos and bloodshed, saying he was against any form of violence to rectify any perceived wrongs as none could be justified on any side.

“While the youths have the constitutional rights to demonstrate what they consider as unjust and unfair, the government too must maintain societal peace and harmony.

“It is a delicate balancing act. But it can be done through prudence, through tact and through sobering resolve,” George said.

According to him, nothing would have called for the protesters to occupy the streets if funds were not corruptly diverted but put inappropriate empowerment programmes to alleviate the sufferings of the youths.

“It is an outrageous anomaly such as this that is pushing our youths to the barricades. And the earlier we address this kind of cankerworm eating at the very root of our national growth, the better for all of us.
Oto gẹ! Oto gẹ! Enough is Enough,” he said.