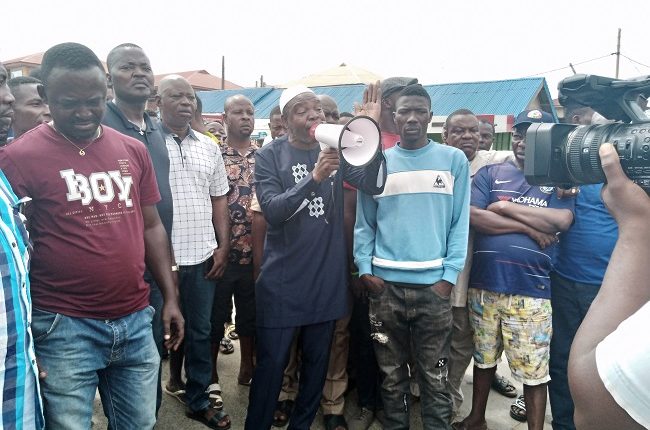 Youths in Akure community under the aegis of Akure Youth Coalition, on Friday, cautioned hoodlums and miscreants engaging in destruction and torching public and private property within the town and state under the disguise of the protest against police brutality, not to turn the town into a theatre of war.

Speaking on behalf of the youth, during a meeting with political leaders and security agencies in the state, the President of AYC, Adekambi Oluwatuyi, noted that the peaceful protest against police brutality by the youths has been hijacked by some elements who have used the avenue to unleash terror on the people of the town.

Oluwatuyi described the development as barbaric and an attempt to reignite the 1983 imbroglio that thrown the Akure town into chaos which claimed the lives of many notable Akure indigenes.

He said “We the leadership of the Akure Youth Coalition condemn in it entirety the destruction of lives and properties under any guise.

Just as the ugly political event of 1983 which claimed many lives and properties is still fresh in our memory, we make bold to state that the genuine intentions of the peaceful protesters should be guided against being hijacked by hoodlums for their self-seeking political agenda.

“The peace enjoys by the residence of Akure and its environs is an asset we so treasure. Any youth who avail himself to be used as an object of destruction to threaten this precious asset is an enemy of the City and will be treated as such going forward.

“The 1983 political carnage which claimed the life of many notable Akure indigenes was a major setback in our socio-political existence as a town. We strongly frown at anyone out to cause a repeat of such in our history.

“We have our brothers across political parties and we so much cherish the consanguinity bond that bonds us together as one. We urge all active players in the field of politics to reign in their supporters for the collective good of the state and Akure as the capital city.”

The youth also said that “we wish to state unequivocally that the Deji and Paramount Ruler of Akure Kingdom Oba Aladetoyinbo Ogunlade Aladelusi and the Deji in Council had been at the fire front of ensuring peace within the Akure Kingdom.

“As youths, we abide by their noble decisions that are meant to restore normalcy and prevent further destruction of properties and lives.

“Notwithstanding, we urge all miscreants to stay clear of our state. We will not allow any hoodlum to take advantage of the situation under any guise. we warned them to stay away.

“However, we urge the federal and respective state governments to look into the genuineness of this protest. We urge the government to heed the Clarion call of the Noble youths. The time for restructuring is now.

“We demand good and responsive governance where the youths will have a say in the government. A Nigeria we will be proud of.

“With a sober heart, we sympathize with all our gallant colleagues who have lost their lives during this struggle, most especially, the brutal killings at the Lekki toll plaza. May the Lord grant them eternal rest. They remain the hero of this struggle.”

Also speaking, the state Chairmen of the Peoples Democratic Party and the All Progressives Congress (APC), Fatai Adams and Ade Adetimehin respectively, commended the youths for the steps to put an end to the destruction of property in the state, especially Akure the state capital.

Speaking, the PDP chairman, Adams said any hoodlum that attack any individual or property should be handed over to security agents saying “political leaders have come together and agreed that the peace, progress and development of Ondo state is our priority. I want to appreciate our youth, political leaders and security agencies for their understanding.

The APC chairman, Ade Adetimehin, described the initiative from Akure youth as unprecedented saying “destruction of property in the state is uncalled for” and urged other youths across the state to a cue in the steps taken by the Akure youths.

“We are appealing to all indigenes of this state that we must all come together to put an end to this violence and burning of our property. I appeal to you all to embrace peace.

“This peace can only be initiated by you and it is only from you that peace can return to our land and on behalf of political leaders in the state, we are appealing to you that this is your state we must all put our hands together to develop this state.”

The Inspector-General of Police (IGP), Mohammed Adamu, has convened a meeting with stakeholders and has agreed to meet all demands raised by the #EndSARS protesters, which include halting use of force against protesters and unconditional release of arrested citizens….Akure youths  Akure youths