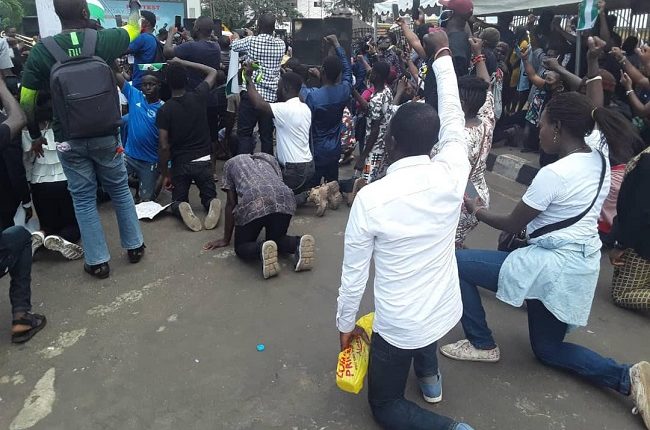 Thousands of #EndSARS protesters on Sunday morning held a worship service at the Alausa protest ground in continuation of the protest that has now entered the 12th day.

The service which was held at the Lagos State Government House, Alausa was tagged an Interdenominational Protest Sunday Service with the theme: “The Glory of the Latter House”.

Leke Adeboye,  the son of Pastor Emmanuel A. Adeboye, the General Overseer of the Redeemed Christian Church of God (RCCG) who presided over the service read the book of Haggai Chapter 2: 9.

Adeboye said: “I am speaking from the good book, some people call it the Bible, I call it the Holy Book. The book says the glory of the latter house shall be greater than the former, this is what is happening in Nigeria right now.”

Commending the protesters for speaking against oppression in the land using the now popular mantra ‘soro soke‘, which literary translate ‘speak loud’, Adeboye admonished the youth to always speak up against injustice.

“We are a generation that cannot be silenced, we don’t off our mic here, we always speak loud here.

“We shall no longer keep quiet in the face of oppression and injustice in our own country,” he said.

Pastor Adeboye later led the protesters in prayer for the nation. Prayers were also rendered for Lagos State. He thereafter urged the protesters to align themselves with Christ so as to be partakers of the good that comes when God turns around the situation of the country.

The popular saxophonist, Kunle Ajayi led the protesters in rendering the second stanza of the National Anthem.

#EndSARS: We are concerned about anger, disaffection in Nigeria ― Fayemi