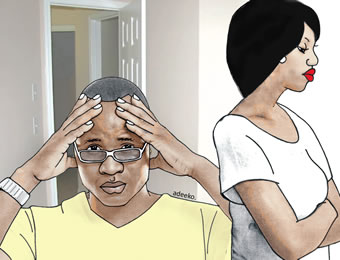 A clearing agent, Emmanuel Adedeji, has pleaded with  an Igando customary court in Lagos State to dissolve his 16-year-old marriage because his wife has defamed his character in public.

He further pleaded with the court to end the marriage  before the devil uses him to commit murder.

“My wife accused me of using my physically challenged son for money ritual. It is God that blessed me with wealth, I never used my son.

“Funmilayo beat me up in public and tore my clothes to rags. She is always raining curses me very early in the morning and those curses are now coming to pass in my life,” he said.

Adedeji pleaded with the court to dissolve the marriage, that he was no longer in love and does not want to commit murder.

“Please, dissolve the marriage before the devil uses me,” he begged the court.

Funmilayo, 49, a food vendor, owned up to the allegation of raining curses on her husband.

“Yes, I always rained curses on him because he used to beat me. On two occasions, he had beaten me to pulp and I ended up in hospital.”

Funmilayo said that her husband had been starving her of sex for the past 12 years.

“My husband has refused to sleep with me for 12 years now for no just cause,” Funmilayo said.

The mother of two said that she accused her husband of using their son for money ritual because his money started booming immediately the baby was born.

“My husband’s wealth came after the birth of our baby. Our son is now 14 years old but neither walks nor talks.”

She begged the court not to grant her husband’s request, saying she still loves him.

President of the court, Mr. Adegboyega Omilola, after listening to the couple, adjourned the case for further hearing.

‘My wife is irresponsible, promiscuous, attempted to stab me, ’

My husband harasses me, threatens to kill me, after feeding, clothing him, woman…