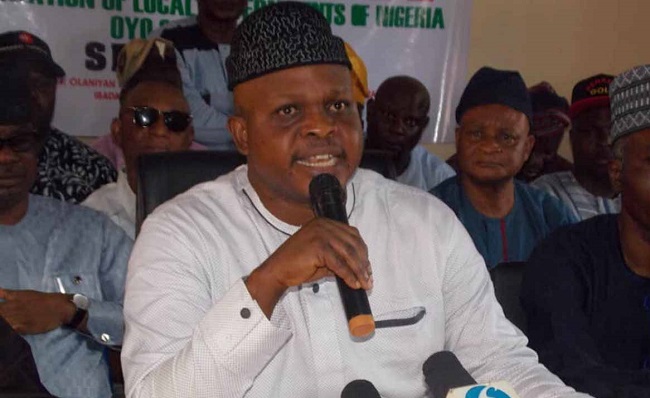 Encomium has continued to trail Prince Ayodeji Abass-Aleshinloye, the Oyo State Chairman of the Association of Local Government of Nigeria (ALGON) as the Ibadan apex socio-cultural organisation, the Central Council for Ibadan Indigenes (CCII) honours him with the Most Distinguished Ibadan Indigene award.

According to CCII, Aleshinloye was honoured for his exemplary conduct as the Chairman of Oluyole. Local Government “…and most outstandingly your courageous and brilliant leadership of the ALGON… in a manner reminiscent of Ibadan warriors.”

Former First Lady, Dr (Mrs) Florence Ajimobi described Aleshinloye’s award as deserving that her late husband, former Governor Abiola Ajimobi would be proud of. She noted that Aleshinloye has continued to distinguish himself. “The award is thus a testimonial to what my husband saw in him- a dogged fighter, an epitome of democratic ideals, a dependable and reliable ally- before supporting his emergence as the Chairman of ALGON in the State.”

Continuing, she said the awardee has proved himself to be a formidable politician who has always stood, unwavering by his political belief.

Also reacting to the award, former Senate leader and Senator representing Oyo Central Senatorial district, Senator Teslim Folarin described Aleshinloye as a top-notch community and political leader who was deserving of the honour. “It’s rare to find someone who has achieved your level of success but has been able to stay so humble and true to themselves. You have always worked at everything you do with your whole heart and it shows”, he said, adding that the award was a reward for his perseverance and excellent service delivery to the people.

In her comment, Member, House of Representatives for the Oluyole Federal Constituency, Hon. Tolu Shadipe-Akande said the ALGON chairman truly deserves the award.

In celebrating with the awardee, the All Progress Congress (APC), Oyo State in a statement signed by its Caretaker Chairman, Chief Akin Oke and Secretary, Hon Mojeed Olaoya respectively said the award was an “eloquent testimony to your astuteness, forthrightness and commitment in all aspects of your private and public life, particularly as it concerns your service to the society and humanity as a whole.”

The Governorship candidate of the APC in the last General election, Oloye Adebayo Adelabu described Aleshinloye as an icon among leaders, describing his legacies as worthy of emulation. “ In the committee of the intellect, you stand out…you are simple, meek and unique. You have touched lives in ways too numerous to mention”, while the former Oyo State Head of Service, Mr Soji Eniade said Aleshinloye’s award rewards his passion for the development of Oyo State.

He described the ALGON chairman as an astute political strategist, brilliant public sector manager, strong team player and a selfless leader who deserved the award.

In spite of the huge investment in the water sector by the government and international organisations, water scarcity has grown to become a perennial nightmare for residents of Abeokuta, the Ogun State capital. This report x-rays the lives and experiences of residents in getting clean, potable and affordable water amidst the surge of COVID-19 cases in the state…Encomium as Ibadan Indigenes  Encomium as Ibadan Indigenes