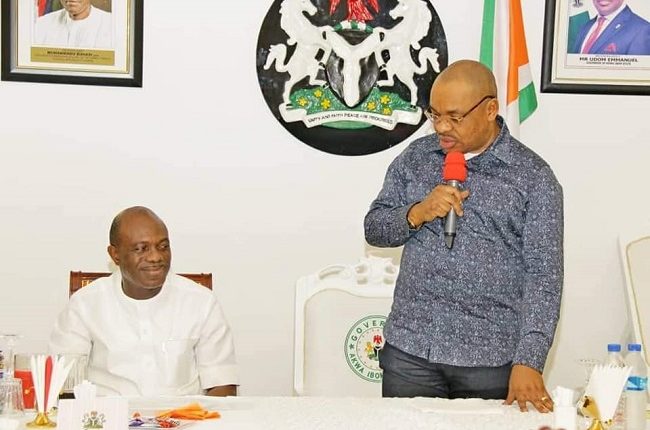 Akwa Ibom State Governor Udom Emmanuel has commended the ongoing reforms at the Nigeria National Petroleum Corporation (NNPC) as well as the restructuring programme, noting that re-jiging the corporation would place it on the best pedestal to deliver on its core mandate.

Besides, the governor pointed out that transforming the corporation into a commercially viable company would create a seamless process in the delivery of reliable products supply across the country.

Emmanuel, who stated this while playing host to the management of NNPC Upstream, led by the Group Executive Director, Adokiye Tombomieye, at Government House, Uyo, the state capital at the weekend, made a case for its operations to be decentralized for greater efficiency.

The governor who expressed appreciation to the delegation for choosing Akwa Ibom state as venue for its 3- day retreat, applauded their initiative towards making the Corporation a Limited Liability Company, urging them to brace up for the task ahead of the new responsibilities.

He commended the management of NNPC for their transparency in publishing financial reports of the Corporation, which he said, “has been unprecedented in recent times” and urged them not to relent in their commitment to bridge existing gaps so as to restore the waning confidence of the people on the corporation.

Governor Emmanuel, therefore, impressed it on the managers to ensure the relocation of the corporate headquarters to occupy some of the offices at the 21-story smart office accommodation at the Dakkada Towers in Uyo, adding that “four floors are there for the entire group, DPR, NAPIMS and NNPC.”

The Governor sued for partnership with the state in its industrialization drive, requesting for license to build a modular refinery that will produce aviation fuel at the state’s International Airport.

However, he Group Executive Director, NNPC Upstream, and leader of the delegation Adokiye Tombomieye, commended the governor for the warm reception accorded them, stating that “the NNPC is transiting from a Corporation into a Limited Liability Company, as one of the steps of restructuring the corporation for efficient and effective service delivery to Nigerians.”

Tombomieye, said the essence of holding a retreat in the state has been to review the performance of the corporation in the last three quarters, remarking that the exercise has been successful.