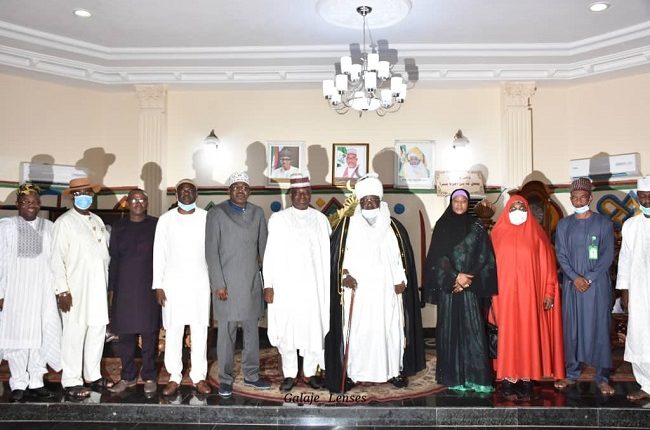 The need for the Senate Committee on ICT and cybercrime to come up with a new and effective strategy that will curtail and end the trend of cybercrime in the country urgently has been emphasised.

The call was made by the Emir of Bauchi, Dr Rilwanu Suleiman Adamu who spoke when the Senate Committee on ICT and Cybercrime paid him a courtesy visit at his Palace in Bauchi on Thursday evening.

The traditional ruler said, “Let me appreciate and welcome you to my palace for this important visit.

“Your coming is timely and we will support Her Excellency to do more for the benefit of less privileged citizens.

Cybercrime has tarnished the image of this country but notwithstanding, I believe with this committee will overcome the situation.”

The Emir of Bauchi also noted that the roles played by Almuhibbah Foundation, a pet project of the State First Lady, Hajiya Aisha Bala Mohammed towards societal development cannot be overemphasised with the establishment of a centre for fighting cybercrime in the state.

While speaking during the courtesy visit, the Chairman of the Committee, Senator Yakubu Oseni said that the Committee was in Bauchi for an official visit to Almuhibbah Foundation.

Yakubu Oseni appealed to the Emir not to relent in supporting and praying for political office holders to succeed and for the peaceful coexistence of the country saying, “Your Royal Highness, we are in Bauchi for an oversight function to Almuhibbah Foundation, and we acknowledge your support to us as politicians.”

The Senator concluded that “I want to specifically tell you that, Her Excellency what she has done today that we are associating ourselves with her, will not only benefit the people of Bauchi State but the people of Nigeria.”

Emir of Bauchi warns against diversion of COVID-19 palliative