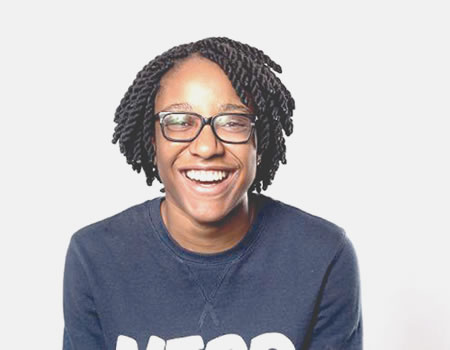 E mily Nkanga is a bundle of talents. The 21-year-old graduate of TV and Film from American University of Nigeria, Yola, Adamawa State is a photographer, filmmaker and writer.

Last year, the young lady who calls the shots at Emily Nkanga Photography decided to showcase the plight of internally displaced persons in the North East with photographs.  She also started an initiative; ‘Keep Hope Alive,’ which gives back to the community a percentage from any of her photographs sold.

In further expressing her creativity, Nkanga recently published a book entitled ‘The caged and the free spirited,’ where she reveals her story-telling talent using images. The book, a product of her personal experiences in relationship, contains mainly photographs of a model and quotations that reflect two extreme sides — a soul in bondage and a freed one. It is also spiced with darkness, tears, pain, colour and smiles.

On photography as her career choice, she says she finds it “very challenging because you don’t want to repeat the same creative idea all over again. If not, it will get boring and people will get tired of it. So, if you have about 10 clients, you need to create 10 different ideas for them. Interestingly, my major clients are in the music industry, maybe because that is where I started from.”

Interestingly, Nkanga is no stranger to the entertainment industry. At an early age, her mother introduced her to the church choir where she played the clarinet. “I was actually in an orchestra. But it was more of an all-women gospel orchestra in a Redeemed Christian Church. It was mostly elderly women, but my mother drafted me in,” she recalls.

On what attracts her to movies, she says “It is an art. Basically, my foundation is to tell stories. If you check most of my projects, there has to be a story. I can’t just say I am putting out images; there has to be a story behind it. So, for me, it is just like story-telling and the ability to tell the stories is what inspires me towards filmmaking.”

Though she agrees Nollywood still has several challenges, she describes it as a success story that can still be improved upon. She says, “In fact, Nollywood has improved. I watched some of the new age movies and I told myself that there is hope. In fact, hope is here. But, I think apart from proper technology, it also has to do with proper training. People feel they can go ahead with something without wanting to go the extra mile. But modern filmmakers know their onions and are seeking to improve.”

Towards proper handling of antiquities

Explaining the functions of museum

Creativity comes to the fore in Educare Trust-Bono contest