Emeritus Professor O. O. Akinkugbe:  The passing of a colossus 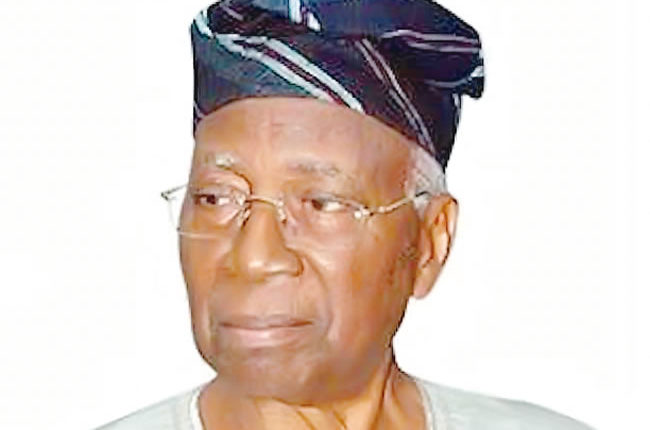 EMERITUS Professor Olujimi Akinkugbe CON, CFR, FRCP, according to a forward written by no other than Dr Christopher Kolade, was certain to be a professor of something, as long as it was not physical education. Akinkugbe`s intellectual eminence, he reasoned, came from his studious curiosity. It was, therefore,  not surprising that he became a world authority in medicine, and  a most articulate communicator in the English language, as attested to in  his “Swirling Currents: Swollen Streams,” a valedictory lecture delivered decades ago to a set of graduating medical students. He would go on, not surprisingly, to garner accolade upon accolades. These, amongst others, include: Commander of the Order of the Niger (CON), Commander of the Federal Republic of Nigeria (CFR) the National Order of Merit (NNOM). He was also the youngest Professor of Medicine to be appointed by an African University” – Prof Osita Agbu in: Hallmarks of Labour Volume 7.

Without a scintilla of doubt, you would be hard put to find, anywhere, anybody more humble, humane and,  forever, solicitous of the other person’s well – being  than the late Emeritus Professor Akinkugbe.

An illustrious scion of the eminently illustrious Akinkugbe family of Ondo –  a town which effortlessly oozes with intellectual  giants like the Akingba’s, the Akinla’s, the Akinsete’s,  and the Dosekun’s, not forgetting the legal impresario, Chief Gani Fawehinmi SAN, the late academic titan was  simply great.

I urge readers, however, to please know that this write up will be more of personal reminiscences. Ever immacutely turned out. Professor Akinkugbe, born July 17, 1933 had, from  very early in life learnt, and appreciated from his father, the virtues of discipline, honesty, fair play, sharing, accommodating and empathy.

My getting to know him, and becoming close to him, was absolutely fortuitous.

Unknown to me that the council of the University of Ibadan had mandated the Registrar, Mr S.J Okudu, to headhunt an individual to come and drive preparations for the humonguous 25th anniversary of the University, scheduled for November, 1973, I suddenly found myself summoned to a meeting with the registrar at the staff club, University of Ife, Ile–Ife, during which he asked if I would mind joining  the university of Ibadan. When he noticed I was wondering where all this  was coming from, he quickly informed  me  that it was at the instance of his friends, who incidentally turned out to be two of the people I respected the most in the entire Ife university community, namely, Mr Sesan Dipeolu, the University Librarian, and my highly cherished  teacher, Dr Segun Osoba. For me, that was it, even as I knew what I was going to face, attempting to prise myself away from the Vice- Chancellor’s office. Hardly had I mooted my leaving than  the University showed its utmost displeasure, promptly  withdrawing  the  Association of African Universities’ Scholarship, tenable at the University of Legon, Ghana,  which I had won after an exacting process which involved  all Ife graduates on the staff of the university, who  had graduated with a First, or Second class (Upper Division) degree.

That, in short, was how I came to meet Professor Akinkugbe, Dean, Faculty of Medicine, and the Chair person of the University’s 25th Anniversary Ceremonials Committee. Even though designated as being responsible to the Registrar on Council Affairs, it was as secretary to the committee I reported daily to the Professor, in the office dedicated to the anniversary, servicing the six or so sub committees, in addition to the main one.

Even though working with the Vice Chancellor, Professor H.A Oluwasanmi at Ife, assisting Mr, now Dr Deji Adegbite, his Executive Assistant, was nerve racking enough, the first thing I noticed in my new job was that with Professor Akinkugbe time stood still, or better put, time simply died. He could work 24 hours nonstop and in that circumstances, who are you to start asking what time it was?

Not surprisingly, we turned up a scintillating 25th anniversary of the founding of Nigeria’s Premier university, to global acclaim. However,  I was joking if I thought those tough days were over because in less than a month the Professor would request that the Registrar  redeploy me to the Faculty of Medicine where he was  the dean. The training and exposure I had, working with this academic cum administrative juggernaut was simply incredible. Ever so solicitous of your well being, you are only too happy to leave no job undone, however daunting. I was this tall in those days, yet Professor Akinkugbe would pat me on the back and say: “Femi well done. I know I can go to sleep whenever I give you an assignment”.

At the expiration of his tenure, I worked for about another six months with his successor, the equally indomitable Professor Kayode Osuntokun, as dean, before I was recalled by the Registrar to the main campus, now strictly  as Assistant Registrar, Council Affairs.

But again, I joke, if I think Professor Akinkugbe had forgotten all about me. Early one morning, Mr Bayo Adeyinka, the University Estate officer, to whom I was particularly close, called me to his office. “Femi, he said, am not calling you to write a memo for me this time around. Olu wants you in Ilorin. He wants you to respond to the advert which would be out in days”.

A few weeks back, Professor Akinkugbe  had been appointed foundation Principal of the University College, Ilorin.

He saw the bewilderment in my eyes. How again was I going to face Mr Okudu, the registrar, whose blue – eyed boy I certainly was and who had come all the way to Ile- Ife, looking for me?

I raised this problem and Uncle Bayo simply said I shouldn’t bother myself at all as Olu and the registrar are pals. That again was how I packed bag and baggage and headed for Ilorin and for some six months leaving my very young family back in Ibadan.

I shall be happy to be told anything that could be tougher than starting off a new university, from scratch, and mostly on a virgin forest being mostly occupied by ancestral land owners. That was the task that confronted Professor Akinkugbe in Ilorin. The early days were consumed by his meeting with the communities whose lands were to be taken over for this public good but who, nonetheless, were very uncooperative. He did this literally from dawn to dusk every day, but he was divinely sent an ‘angel’ in the state military administrator, Col. George Agbazika Innih, who am surprised the University of Ilorin is yet to honour all these many years. Or did I miss that?

With his commissioner for Education, who would later be governor of the state, Uncle Cornelius Adebayo, himself a university teacher, things were made easier than they would, ordinarily, have been.

As soon as he settled down, his utmost concern, apart from physical development, was staff development. He recruited  many young and brilliant graduate assistants who within  their  first year, were already on their way abroad for higher studies just as those  with the PhD degree were being given grants to attend learned conferences abroad.

This write up will not be complete if I fail to mention that Professor Akinkugbe loved his medicine so much that, in spite of his hectic schedule, he still arranged to practise it at the nearby Ilorin General hospital. Those who know him, professionally, am sure, must  be saying that is the essential Professor Akinkugbe.

It can be rightly said that everything he touched, turned  to gold,  even though,  God Almighty it was who saved  him  when some people in Zaria wanted  to kill him after the jumat service, one Friday when he was the Vice- Chancellor of the Ahmadu Bello University,  Zaria . His saviour turned out to be the Yoruba wife of a top Northern bureaucrat who, having  eavesdropped the plan, then  phoned him saying: Prof, you dont know me but today’s jumat service must not end before you flee your house. Run now, Prof,  and don’t even  bother to try save anything.

His maiguard would later be hacked down by the marauders, thus paying  the supreme sacrifice.

Concluding, below is part of my congratulatory message to the late Emeritus Professor, published on these pages,  on his 80th birthday: “…it was my distinct pleasure to see him more regularly in the last 12 months and, as dapper as ever: first at the wedding of the daughter of my dear brother, Bayo Jimoh, the Group Managing Director of the O’dua Investment Co Ltd, then at the  50th anniversary of Obafemi Awolowo University, Ile -Ife, where his Government College Ibadan classmate, Ambassador (Dr) Christopher Kolade, gave the anniversary lecture and  lastly, at the epochal inauguration of his other GCI classmate, the Nobel Laureate, Prof Wole Soyinka, as the inaugural winner of the Awo Prize for Leadership, an event that truly showed Dr Tokunbo-Awolowo Dosumu as a true daughter of her illustrious father, the redoubtable Chief Obafemi Awolowo.

Prof looked as radiant and jovial as ever. He cracked jokes with Bayo Jimoh and I patted me on the back as he said: “Femi, those were the days”. Sir, you have more than earned your stripes. Long may you live in glorious health, in the mighty name of Jesus, Amen.”

Adieu Pro, rest eternal at the bosom of your Lord and Master, our Lord, Jesus Christ.