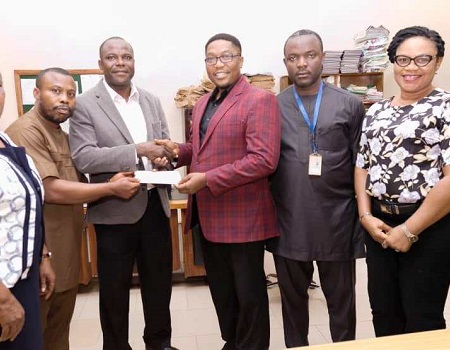 The Sir Emeka Foundation has donated educational materials and healthcare facilities worth millions of dollars to hospitals and academic institutions across Nigeria and 18 other African countries.

In a statement signed by AIG Chris Ezike (Rtd, Chief of Staff to Chief Emeka Offor, he said the gesture was in line with Sir Emeka Offor’s initiative geared towards supporting the efforts of the Federal Government in the provision of quality healthcare service and education to the citizens.

The statement has a break down of beneficiary institutions to include, (eighty) Universities, 22 (twenty-two) Polytechnics, 37 (thirty-seven) Colleges of Education, 7 (seven) Public Libraries (one from each of the 6 (six) Geo-political zones including FCT), 180 (one hundred and eighty) Primary and Secondary Schools each nationwide.

It read in part:” Sir (Dr.) Emeka Offor is a philanthropist par excellence; a man with the milk of human kindness flowing abundantly in his veins, as his passion for the poor and downtrodden is unrivaled. Sir “E” as he is fondly called made the largest single donation by an individual to Rotary Foundation in the whole of Africa when he donated 1million dollars to rid the world of Polio. His total contribution to Rotary International for the fight against Polio currently stands at $3.1m today. The Sir Emeka Offor Foundation (SEOF) is a household name in philanthropy as robust, responsive and sustainable initiatives aimed at complementing the Government’s efforts are rolled out from time to time for the betterment of the society.

“In view of Sir (Dr.) Emeka Offor’s innumerable strides in business and philanthropy, he has undoubtedly created a niche for himself within and beyond the shores of Nigeria and as such, his name will linger forever in the minds of the people. These are indeed the caliber of people the nation needs now that we are faced with very daunting challenges in our economic, health and education sector.”