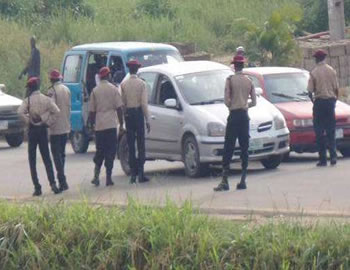 Bauchi State Sector Command of the Federal Road Safety Corps (FRSC), has vowed not to spare motorists and other road users in the State who engage in reckless driving and over-speeding as well as overloading during the ‘Ember’ months expressing concern over the high number of road crashes that are usually recorded during the ’ember’ months.

Sector Commander of FRSC, Corps Commander Abubakar Najume, gave the warning in his speech during the flag-off of the 2019 ‘Ember’ months campaign on Wednesday held at the Tipper Garage in Bauchi saying that the warning was necessary in view of the loss of lives and properties that occur as a result of accidents mostly caused by reckless use of the roads.

He said that in order to reduce the accident rate, the Corps has embarked on aggressive sensitisation among motorists in the state and as a result, will not spare anyone of them who violates road traffic regulations especially during the period which is characterised by high vehicular movement on the roads.

The FRSC boss said: “The purpose of this campaign is to call on people to comply with traffic rules and regulations. We have critical offences and they are the major causes of accidents on our roads.

“These critical offences include overloading, use of bad, expired and worn out tyres, over-speeding and taking of hard drugs, among many others. We call on people to be careful while behind the wheels. Because of this time that we are in now, drivers should be careful and drive safely and make sure they abide by the traffic rules especially over-speeding, it is the major cause of accidents”, he added.

Abubakar Najume explained that “We are doing this public enlightenment to tell them the dangers of their actions which cause loss of lives and properties. If they fail to comply, we will arrest them and prosecute them in accordance with the law.”

Bauchi State Governor, Bala Mohammed, in his speech at the campaign flag-off, also warned motorists to avoid driving under the influence of drugs just as he cautioned drivers not to take drugs and advised them to rest when they are tired rather than take drugs that will boost their energy.

The Governor who was represented by the Commissioner of Works and Transport, Abdulkadir Ibrahim, said that: “The moment you are on the steering, even Panadol, do not take because your body may not accommodate it at that time and this could lead to accidents. When you take Tramadol or even Panadol and you will see a single car as three cars coming and you won’t know which to avoid”.

Bala Mohammed concluded that ” If you take Tramadol and you drive, you are just sending yourself and those in the car with you to the grave straight. So please, in these months, put your senses together because there is a heavy flow of traffic on the roads.”

The campaign flag-off was later followed by a road awareness show around the loading points within Bauchi metropolis during which public enlightenment was done for all categories of road users.