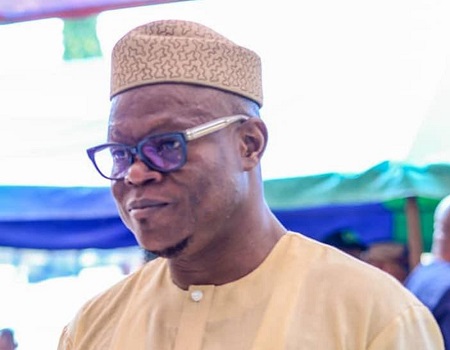 Chairman, Senate Committee on Diaspora, Non-governmental Organizations and Civil Societies, Dr Surajueen Ajibola, has said that electoral offences persisted in the country because of the weak legal institution to deal with the prosecution of violators.

Speaking at the public lecture organized by the Correspondents’ Chapel of the Nigeria Union of Journalists (NUJ), Kwara State council in Ilorin on Thursday, Senator Ajibola representing Osun Central in the Upper Legislative Assembly said that the Electoral Act does not have adequate provisions to combat electoral frauds.

He also said that the electoral act has a shallow mechanism for enforcement by vesting on the Independent National Electoral Commission (INEC) the responsibilities of prosecuting electoral offences.

The lecture was entitled ‘democracy and the rule of law.’

“It is surprising to note that in spite of the degree of illegal activities that have characterised Nigeria’s elections, the perpetrators and beneficiaries of these illegal acts are hardly investigated, prosecuted and punished for their crime, even though there are reasonable grounds to prosecute them.

“Non-investigation and prosecution of election-related offences further promote the impunity within the electoral process. The reasons for the non-investigation and prosecution of perpetrators of electoral offences are not far-fetched. To start with, the nature of the Nigerian state supports electoral manipulation and this explains the intensive and persistent struggle to control and exploit the offices of the state.”

The lawmaker also lamented the deteriorating security situation in the country, adding that “today Nigerians live in absolute suspicion and a constant feeling of an impending disaster.

“As a result, most economic activities have come to a halt and private businesses are crippling because of the pervading hostile environment and destruction of infrastructure. Aside from the social tension and displacement of people, the heightened hostility between the various groups, particularly on ethnic and religious lines poses a serious threat to the unity and peaceful coexistence of the country.

“While every country has her fair share of security challenges, since May 29th, 1999 when the current democratic dispensation began, there seems to be a deterioration in the security situation in Nigeria. The
activities of armed robbers, ethnic and religious crisis, the insurgency (Boko Haram) in the North East, militancy in the Niger Delta, a spate of kidnappings major cities and roads, ritual killings and other violent crimes, show the precarious security situation in Nigeria.”

Senator Ajibola added that this unsavoury situation “has fuelled the demand for the decentralization of the establishment of security apparatus by empowering state governments to establish their own state
police.

“At different for a, I have called for the creation of state police.

Even as Attorney-General of Osun State, I have experiences that suggest the necessities for state police. Again, it is still not too much to lend more voice to this call and I think the present security challenges we are faced with has made it more than a call but a necessity which the government must seriously look into.”