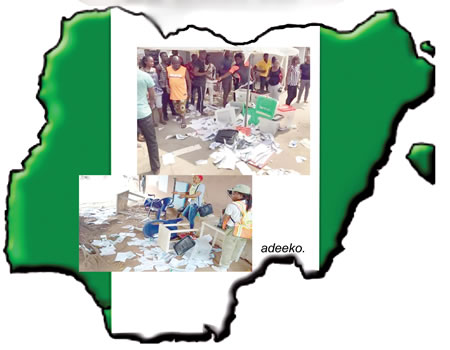 There were no celebrations on the streets when the Independent National Electoral Commission (INEC) declared President Muhammadu Buhari winner of February 2019 Presidential Election. Instead,  of celebration there were gloom, sadness and uncertainty everywhere , as people wore long faces, a sharp contrast to 2015, which witnessed nationwide jubilations and excitements, because then votes counted.

Domestic and international observers from Europe and USA now and again have expressed disappointments with the 2019 Presidential Election which the main opposition Peoples Democratic Party (PDP) claimed lacked transparency.

In a recent report released by the Centre for Democracy and Development (CDD), the centre observed that INEC was less transparent in the conduct of 2019 election than it was in 2015 and 2011 respectively.

The Centre described collation and tabulation of results from the polling unit to Ward Collation Centers as chaotic, open to manipulation and in some cases badly disrupted and opaque.

Ward level tabulation and collation is a critical aspect of the election process. How it was handled can increase and decrease the credibility of election.  Its disruptions and manipulations give opportunities for opportunistic political parties and individual candidates to dispute election results, hence the litany of cases before the various National and States Election Tribunals.

Section 131 of the 1999 Constitution as amended provided that a person shall be qualified for an election to the Office of President if he is a citizen of Nigeria by birth; if he has attended the age of 35 years; if he is a member of a political party and is sponsored by the political party and he has been educated up-to at least School Certificate level or its equivalent.

Each and every one of these laws requires proper interpretation. Every judge understands his duty to interpret the wordings of the law and to dispense justice in accordance with the letters of the law. Only a mystery will make the court to rule against the constitution . The Tribunals must allow the laws as stipulated  to speak as the Judiciary also is on trial. How they interpret the extant laws in the face of national expectations will have far reaching effects , especially on the stability of democracy in Nigeria.

For the avoidance of doubt, the Kenya Supreme Court didn’t hide under technicalities . It determined the petition on its merit and held as follows:  ‘A decision is hereby issued that the elections held on August 8 were not conducted in accordance it the constitution and the applicable law. The results are therefore invalid , null and void. Election is not an event but a process. After considering the totality of the entire evidence , we are satisfied that the elections were not conducted in accordance to the dictates of the constitution  and the applicable principles’

The main reasons why the Supreme Court nullified the results were that the IEBC was not able to show that they had followed all procedures and that their servers were not hacked. The behavior of the IEBC has been suspicious and / or incompetent.

They made claims that could not stand technical scrutiny of the expert panel appointed by the Supreme Court. For instance, IEBC declined to provide the internal configuration firewall to its server, arguing that it will affect the security of their system. The technical team was able to prove that the integrity of the system would not be affected at all by providing the firewall configuration. But IEBC did not provide the firewall configuration anyway. That the IT boss in charge of the elections was tortured and murdered  a week before elections does not give any comfort. The IEBC also made procedural lapses related to printing of ballot papers, having observers. They further refused to provide a trail of those who had accessed the system.

All of this, in itself, made the court feel that something was amiss and they ordered a re-election.

This is a great shot in the arm for independence of judiciary in Kenya . It is interesting to note that international observers declared the elections to be ‘fair’. They noticed some ‘discrepancies’ but then still declared the elections to be above board. But then the issue is that for international observers, elections are an event. In reality elections, as the Supreme Court observed, are a process.

Winning elections is not about the Election Day, it is about planning and strategizing well in advance. It involves (1) ensuring that your people are in key positions, (2) your patronage extends to those who can make a difference (getting votes or raising money), (3) you convince people that you will win and that will be in their interests.

The Supreme Court judges in Kenya come from the same society as the people. As proud members of the bench they did everything to stand firm on the provisions of the law. I would tend to go by their judgment and will expect our own judges in the Presidential Election Tribunal  to deliver judgments without fear or favor.

For some time now, the judiciary has come under intense criticisms and attacks, having also been accused of corruption and perversion of justice. Will the judges redeem the image of the judiciary? Will they deliver judgment based on facts or will they further capitulate and thus sink further the hope of the masses?

The gravamen of the petition and cross petition before the Presidential Election Tribunal which must be determined by the panel of Judges bordered on the issues of qualification and corrupt practices that characterized the 2019 presidential elections.

Judges understand  their duty to dispense justice and to interpret the letters of the laws as it applied to specific issues.

As the fate of citizens wane and thin in the executive arm of government and the legislature, the judiciary despite all odds remains a source of confidence and fearlessness. And like they say, the last hope of the masses.

Aguiyi sent this piece through totalpolitics@yahoo.com

Woman, if you smell bad, quickly see a doctor—Experts