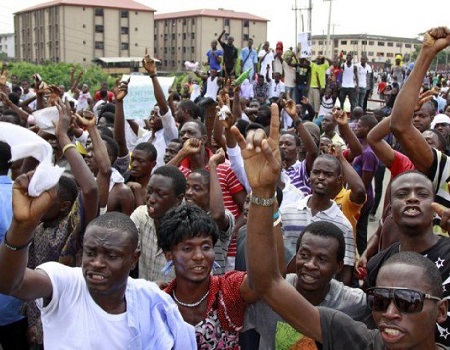 Youths under the aegis of Kogi State Youths Forum on Thursday marched through streets in major towns across the state to draw the attention of the Governorship election tribunal adjudicating over complaints arising from the last governorship election in the state on the need to ensure justice.

The youths in their hundreds marched through major streets in cities like Ajaokuta, Idah, Ankpa, Lokoja and Kabba-Bunnu respectively chanting aluta songs.

They bear placards with inscriptions such as “Kogi Youths Call For Justice”, ” We are not supporting any political party but want the tribunal to give fair judgment in the case”, “We say no to compromise by the tribunal” and “Kogi Youths said no to election robbers” amongst others.

Recalled that the Kogi State Governorship election took place last November with the incumbent Governor emerging the winner amidst protests by both local and international observers.

The main opposition Peoples Democratic Party (PDP) and some other political parties in the race had approached the Governorship Election Petition Tribunal sitting in Abuja questioning the declaration of Governor Bello as winner of the poll.

The president of Kogi youth forum, Comrade Salifu Ibroma told newsmen in Lokoja that the November Governorship election has grossly tainted the image of the state before the international community and questioned the integrity of the nation’s electoral umpire.

He noted that the onus rests on the judiciary to restore the image of the State and the integrity of the electoral system by giving fair hearing to all parties in the case and ensuring that justice is duly served.

He appealed to all the aggrieved persons, political parties and their supporters to have fate in the ability of the judiciary to ensure justice in the matter while commending the youths for exhibiting a high level of maturity while the court process lasted.