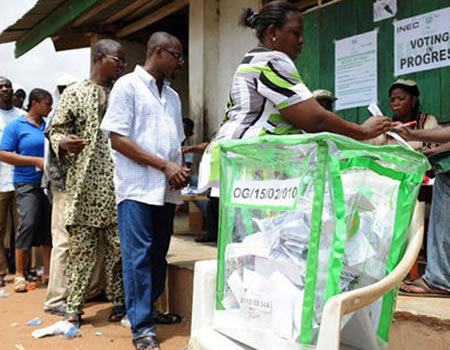 THE people of Anambra voted amid tight security in the Saturday governorship election.

The News Agency of Nigeria (NAN) reports that no fewer than 36 political parties and candidates are participating in the election being conducted by the Independent National Electoral Commission (INEC).

NAN correspondents who visited the 4,608 polling units in the 21 council areas report that heavily armed security operatives were seen in all the units and council areas visited.

NAN reports that the security operatives refused people not participating in the election access on Onitsha-Enugu expressway as well as Oye-Agu/Abagana junction linking communities on the Onitsha road.

At popular Borrowmew Roundabout in Onitsha, there was a heavy presence of army, police and NSCDC operatives who refused every unaccredited vehicle passage.

NAN reports that combine team of security personnel comprising army, Police, NSCDC, Immigration and others blocked the River Niger Head Bridge, Onitsha, in line with no entry directive announced before the election.

One of the military personnel told NAN under anonymity that only accredited vehicles were allowed to pass through the roadblock.

In Ifte-Awka, Okpuno, Amawbia, Nibo and Umudioka, all in Awka South Local Government, security personnel were seen at all the major junctions and polling units.

At Aroma Junction in Awka, Mr Joshua Ejimbi, the INEC presiding officer, told NAN that he was happy with the level of security at his center.

Mr David Anyamele, a local observer from the Centre for Citizens with Disability, also corroborated the position of Ejimbi on security and applauded various security organisations for massive deployment of their personnel for the election.

Mr Nduka Ilechukwu, a voter, said the presence of security personnel at his St Martin Ihiala polling unit encouraged many people to take part in the exercise.

Ilechukwu said there was apprehension before the election that the election might be disrupted but the number of police and other security men presence in all the polling units had restored the confidence of the masses.

In Oyi and Njikoka council areas, the security was water-tight and Rep. Gozie Nwamkpa described the security as perfect.

Some 37 parties are fielding candidates in Anambra to try to wrest power from governor Willie Obiano, of the All Progressives Grand Alliance, who is seeking a second term.