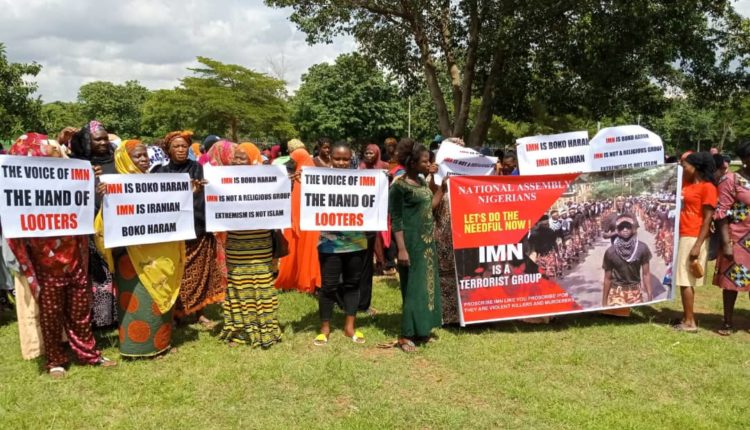 Commercial activities in the Federal Capital city were on Tuesday halt momentarily following a protest against the menace of the Islamic Movement in Nigeria, IMN.

The protest, which was championed by the Concerned Women/Africa Arise for Change Network was well attended by angry Nigerians, who insisted the activities of IMN have political undertones.

The tall took off at Unity Fountain and was terminated at the National Assembly complex.

Speaking during the well-attended rally, Princess Ajibola, convener of the group, called on the National Assembly to pass a resolution, compelling the Office of the Attorney General of the Federation to file a suit for the court to declare IMN a terrorist organization so that law enforcement agencies can better respond to the threat it poses to the country.

Concerned Nigerians Women and the Africa Arise for Change Network are staging this rally today in order to put it on the record that we are not in any way part of the conspiracy of silence in the glaring threat now posed to the country by the Islamic Movement in Nigeria (IMN).

Nigerians and the entire world was last week threated to the macabre spectacle of IMN members invading the National Assembly, the most important site for our democracy. While every Nigerian has the right to protest to the National Assembly, the intention of the IMN militants was very obvious because they were there to sack the parliament as demonstrated by their attack on the policemen on duty.

IMN attacks on members of the public and security operatives is not new. Killing law enforcement officers is also not new to them. What however became alarming in this instance was the sheer intensity of the attack during which they shot several policemen in addition to wounding others with catapults and cudgels.

It is laughable that the IMN extremists resorted to playing the victim after their attempt to overthrow the National Assembly failed. Had they succeeded in entering the chambers and killing our federal lawmakers like they planned they would have by now been declaring that Nigeria is a Shia Republic.

Further proof that they intended to overthrow the government was their decision to target the Federal Secretariat within hours of attacking the National Assembly. This was the IMN militants targeting the buildings that implement the policy of the executive arm of government. With this pattern, it is a matter of time before they launch crippling attacks against the court in order to instil fear in the judiciary.

We have heard the lies that have been repeated over and over by IMN sympathizers that the group is harmless and non-violent. Our rally today offer a demonstration to such people on how non-violent marches are held. Peaceful protests does not involve protestors menacing other citizens, chanting anti-government slogans and definitely does not involve attempting to forcefully take over government building, neither does it involve killing policemen that are on legitimate duty for the country.

We therefore question the conspiracy of silence by those who think Nigeria deserves to have another terror group when the vestiges of Boko Haram is still being eradicated from their remaining strongholds. We condemn those that have obstinately refused to see nothing wrong with recent attempts by IMN insurgents to take over the National Assembly. Equally condemnable are those that are advocating for the extremists to be pampered and allowed to wreck the country for other law abiding citizens.