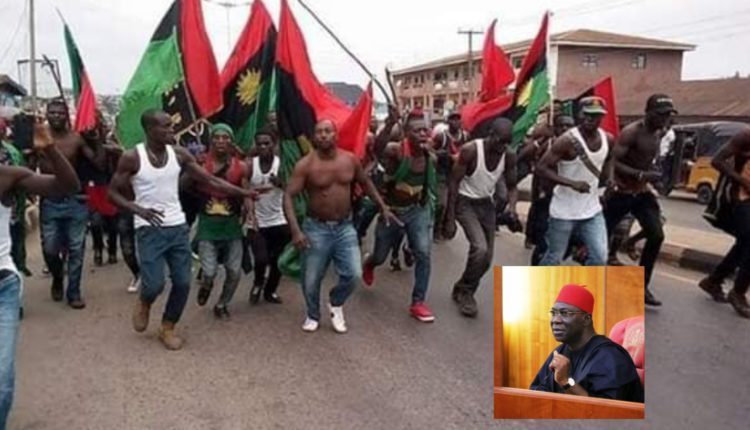 Comrade Chinedu Ogah, a chieftain of the All Progressives Congress (APC) in Ebonyi State has said the attack on the former Deputy Senate President, Senator Ike Ekweremmadu, in Nuremberg, Germany was stage-managed just to attract public sympathy.

Ogah, while speaking with journalists in Abakaliki, on Saturday, maintained that a personality like the former Deputy Senate President should have travelled with not less than five personal aides on such important festival who would have guarded him from the unfortunate incident.

The APC House of Representatives candidate for Ezza South and Ikwo Federal Constituency in the 2019 general election further painted a dramatic picture of the video of the attack saying that if the attack was not stage-managed, Ekweremmadu should have run to his standby car and zoom off having noticed an unhealthy environment instead of running around “as if it was a moonlight drama”.

According to him, it was ridiculous that even the driver who conveyed Ekweremmadu to the venue was inside the car while the former Deputy Senate President was still being pursued around by the mob.

He further emphasized that the problems of politicians from the South-East geopolitical zone remained greed, selfishness, hatred among other negative tendencies which have sharply divided Ndigbo as an entity.

He noted that the restiveness of the youth is because the leaders have not done any concrete thing to ameliorate hunger and poverty ravaging young school graduates and youths in the society.

He, however, maintained that unless Igbo leaders begin to speak the truth and stand by it, the issue of Fulani herders clash and agitations from the Indigenous People of Biafra (IPOB) won’t be a problem.

“Who told you that Ekweremmadu was attacked? He stage-managed it to attract public sympathy. A top politician like the former Deputy Senate President supposed to have travelled with at least five personal aides. Where were they when the incident was happening?

“If you watched the video you will see that Ekweremmadu actually wanted to be attacked otherwise he should have run to the car which was on standby instead of running to the hall and turning back again towards where his car was parked,” Ogah he said.

Review your stand on ministers access to you, IPAC Chairman urges Buhari