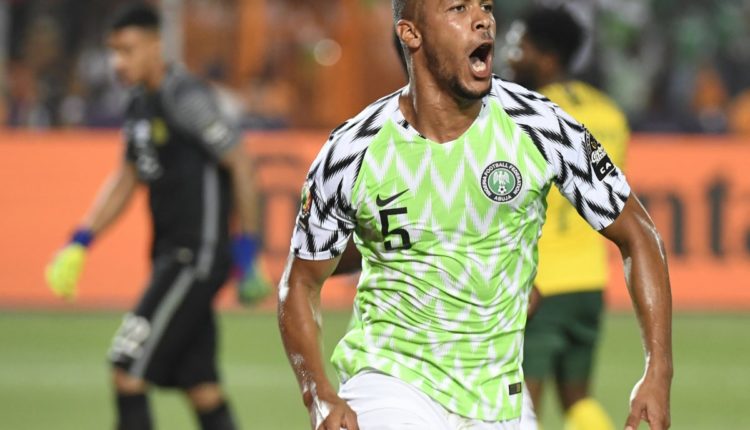 South Africa’s Bafana Bafana suffered Africa Cup of Nations heartbreak as they slipped to a last-gasp defeat against Nigeria in the last eight on Wednesday night.

William Ekong’s 90th-minute winner dealt the cruelest blow to Stuart Baxter’s side, who had fought back to level in an even contest at Cairo’s International Stadium.

Bafana couldn’t muster the intensity that saw them put the wind-up host nation Egypt from the get-go the previous weekend, with Wilfred Ndidi the first to fire over the crossbar.

Sifiso Hlanti somehow escaped a yellow card after stamping on Chidozie Awaziem in the tackle, before lumbering Lebo Mothiba was booked for fouling the very same Super Eagle.

The Nigerians hit the front when Samuel Chukwueze bundled past the helpless Ronwen Williams after Alex Iwobi’s cut-back had been deflected into his path just before the half-hour mark.

Talisman Thulani Hlatshwayo joined his team-mate in the book for a foul that almost paved the way for Nigeria’s second.

Peter Etebo struck a mean free kick that Williams did brilliantly to tip on to his bar.

But Bafana grew into the second half and pulled level amid the first VAR drama of the competition, with video refs introduced from the quarter-final stage.

Percy Tau’s free-kick was flicked on before Bongani Zungu added the finishing touch with a looping header beyond Daniel Akpeyi.

It was ruled out for offside by the raised linesman’s flag, but a look from the television officials in a faraway bunker showed the vital touch had come off the back of Nigeria’s Odion Ighalo.

Zungu had his second of the tournament and South Africa had their leveler.

But Williams’ missed punch from an 89th-minute corner, coupled with Buhle Mkhawanazi losing the plot, allowed Ekong to sneak in to secure Nigeria’s spot in the last four and see South Africa’s campaign hit the buffers.