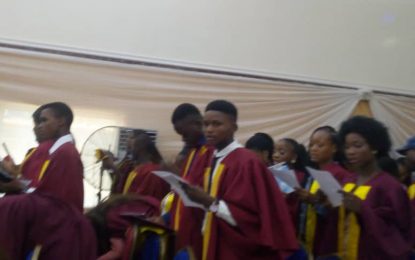 The Vice-Chancellor of Eko University of Medicine and Health Sciences (EKOUNIMED), Ijanikin, Lagos, Prof Olusoga Sofola, has urged the newly matriculated students of the university to be focused, determined and hardworking in order to graduate in record times and with good grades and character.

He gave the admonition on Thursday while addressing them at their matriculation ceremony, which was third in the series, and held on campus and also connected virtually by some other people via Zoom platform. They are 36 in all.

He said they should know that even though the university had a quality academic and non-academic workforce to train them and in a conducive environment, they must have to play their own roles committedly by being hardwork and disciplined as medical programmes are demanding.

Sofola, who is a Professor of Physiology and former Deputy Vice-Chancellor of University of Lagos (UNILAG) Akoka, said EKOUNIMED as one of the privately-owned universities in the country that was licensed by the Federal Government in 2017 for operation, is established to contribute to the production of quality medical professionals in Nigeria but for the global market.

He said the university is in partnership with such institutions as UNILAG, Nigeria Institute of Medical Research, Yaba; The Eko Hospitals and Lagos State Health Service Commission for various teaching and research activities and mentorship for students.

He said the statistics have shown that the 34 medical schools in Nigeria at present are grossly inadequate to produce enough medical doctors and other health professionals including pharmacists, physiotherapists, nurses, laboratory scientists, among others needed for over 200 million population.

According to him, since Nigeria has a ratio of one doctor to 6,000 patients at present, it means the country will need over 303, 000 doctors more to be able to meet up with the World Health Organisation (WHO) recommendation of one doctor to 600 patients.

The implication of this, he explained further, is that Nigeria needs at least 10,605 new doctors on yearly basis to join the workforce.

He said based on the current admission of only between 10 and 15 per cent of all the qualified candidates by all the medical schools in the country and the annual production of about 3,000 to 3,500 doctors yearly, it will take the country about another 100 years to produce enough medical professionals needed.

He congratulated the matriculating students and urged them to give their studies and other activities expected of them adequate attention.

3,658 graduate from Federal School of Statistics