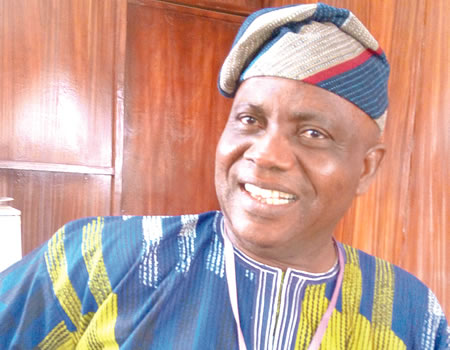 Captain Wole Akinyeye, an international relations expert/strategist and university lecturer, was in the Nigerian Army for 16 years and retired in 2000. A member of the EgbeAtunluto Ekiti, he speaks with DAPO FALADE advocating the turn of Ekiti South to produce the governor of Ekiti State in 2018 for the sake of equity and justice.

WHY the increasing cry of marginalisation of Ekiti South in the political calculations of Ekiti State?

I know Ekiti to be a place where injustice is never tolerated; an Ekiti man would rather die than for him to be cheated. However, I discovered that since 1999, a part of the state has been totally neglected in the governance of the state and that part is Ekiti South which is made up of six local government areas in the state. The other 10 local government areas, made up of Ekiti North and Ekiti Central, have dominated the political scene and it now looks as if it is their birthright. This has led me to say that we should have a level-playing ground for everybody.

Is your assertion about Ekiti hating injustice not contradictory to what is playing out, with a part of the state having been left out since the advent of democracy in 1999?

That is what I am saying and it beats my imagination why such would happen in a zone where the Femi Falanas, the NiyiOsundares, the Wole Olanipekuns of this world and several others came from. I cannot understand why such a zone will just be grossly marginalised like that and nothing has happened. I have gone round the whole state to sample opinions. People are even surprised that such a thing could happen.

What I mean by marginalisation of Ekiti South is in terms of sharing of political patronage. I discovered that the North has produced two governors in the persons of Engineer Segun Oni and Dr Kayode Fayemi. The Central has produced Chief Niyi Adebayo and Dr Ayodele Fayose, while the South has not produced any. That is the first point I am making here.

When you think of other political appointments, Ekiti South has also been grossly marginalised. I think the only minister we have so far produced in the zone was an interim minister in the person of Dayo Adeyeye. I have not heard of any substantive minister being appointed from the zone for a good number of years. I think we need to, at least, address it because we don’t believe in injustice in the state.

Looking at 2018, how do you think this injustice you mentioned can be rectified?

As a strategist, I believe in doing things in a very simple way and the simple solution to this problem is to follow the formula that Nigeria adopted at the exit of the military regime in 1999. It was an opinion then that the South West must be assuaged. In my own opinion too, if we want to say we are good Ekiti people, we should assuage Ekiti South by making all serious political parties to zero down their governorship candidates on their members from the zone.

You are asking for zoning arrangement to produce the next governor, but don’t you think this can lead to mediocrity as the norm now is that the best person should emerge, irrespective of where he or she comes from?

Such an arrangement cannot bring up mediocrity. If you know what is called Ekiti South; I have just mentioned three people from the zone, there are numerous others…

But those people you mentioned may not be interested in politics…

No, no, no. Don’t say they are not interested. Falana has shown interest before now. Are you saying Osundare will not be interested in what happens in his zone. These are people who play politics, using another method. Ekiti South are people who excel in things they are interested in. We strive for excellence in the zone. In essence, zoning the governorship slot in 2018 will not bring up mediocrity.

Even when you talked about mediocrity, which of the governors we have so far produced in the state has performed excellently since we started in 1999? I am sorry to say this, but without condemning anybody, as far as I am concerned, I don’t think we have had it nice, unlike some other states. What we have had so far in the state is governorship of one day, 10 troubles, up till now. I am sorry to say it, but if you ask me, I can point out examples where we have had it very rough.

Don’t you think this peculiar nature of one day of peace, one week of trouble made governance and development difficult in the state?

There is nothing peculiar about it. It is just that the people who have emerged as governors, did not know how to manage the success they got. For example, once you have won election in an homogenous state like Ekiti, you must carry everybody along. It must not be a game of winner-takes-it-all. You must know how to reach out to other people from the other zones in the state and that will bring about a sort of easy relationship between and among the people. That has not happened since 1999.

You as a leader of thought from Ekiti South, what are you doing to realise the zone’s agenda in 2018?

On my own, without anybody advising me, I opened a platform on the social media, precisely the Facebook,  where I am reaching out to everybody and I discovered that some people already have some platforms, trying to canvass for the governorship position. I have been interacting with them, telling them it is now the turn of the Ekiti South. I also have another platform on Whatsapp where we added important people from Ekiti and, in fact, they are applauding my efforts just to mobilise the people to let them know that, this time around, it is the turn of Ekiti South. If we should lose it now, I think we may not have peace in that state.

Are you reaching out to the leadership of the various political parties in the state, as well?

Yes, but we want to do everything step-by-step. This interview is part of the efforts. This thing started some weeks ago and I just decided that we have to say, enough is enough and I still stand by it. When I created those platforms, I was just using them as a way of reaching out and all the reports that I have got so far are very positive, from the North and Central zones and even from people who are not part of the state. They are saying we just have to do something about it. Just be watching; we have plans.

In essence, you are saying Ekiti South will only support the party that picks it governorship candidate from the zone…

We are going to support the best candidate from Ekiti South. This is my own opinion: the political party that picks the best candidate from Ekiti South should be the party the people from the zone should vote for because I think the zone must get that governorship slot. That is why I said we should use the 1999 arrangement so that, head or tail, Ekiti South will still win. Anything short of that is going to cause problem in the state because even our children will ask us, ‘what did we do in our time?’; ‘why will, for close to 20 years, two zones have been dominating the political scene in the state and the other zone was totally neglected, insulted and marginalised?’.

What do you mean by saying anything short of Ekiti South producing the next governor would result in problem?

I am a strategist and, coming from the military background, I know that the easiest causes of conflicts in any society are where people feel neglected; where they feel their opinions are not carried to the right quarters. When the leadership is not zoned to them or when they cannot associate with the leadership, they may be passive to such a government and civil disobedience might start from there. Such a people may say they are not going to pay tax; they may say the governor is coming and they will go and block the road and all the rest of such. I have talked with local people from Ekiti South and they are so annoyed with the present situation of things.

Are you carrying the other zones along in your bid to actualise the Ekiti South agenda?

The other two zones don’t have very strong claim to the governorship slot. I discovered that the people around the prospective candidates are people who are just looking for what to get out of them. Sorry for being specific now: I recently met Engineer Segun Oni who happens to be my friend. I was in his house in Ifaki-Ekiti and when I met him, I discovered that there were so many hangers-on, loitering around the house. I know that he is not an over-ambitious person; he is an easy going man. So, I could see those people around him as people who just want to push him to be there so that it can be business as usual because they believe that if he is there, they will be part of the action. But Ekiti people are not known to be greedy; they are not known to be selfish; they are not known to support injustice.

The question became imperative because politics in Nigeria goes beyond online interaction to being practically in the field, lobbying for concession…

I know this, but don’t forget that I had said earlier that I just entered this agenda recently. Let me tell you frankly, I don’t mind whoever is there as the next governor of the state, as long as he or she she is from the South. I know some people who are aspiring from Ekiti South, but I am taking my time to study them. When the time comes, I will sit down, look at their résumé, their views, antecedents and acceptability and all the rest.

For now, I cannot say that this is my candidate or the party I am pushing for; all I am saying is that all the serious and major political parties must zone their governorship slot to Ekiti South. Any party that will come to Ekiti without picking somebody from the South, I will see such a party as one that supports injustice because the zone has been marginalised and subjugated for about 20 years. This is my opinion.

What will happen if these political parties eventually pick their candidates from outside Ekiti South?

I don’t know what will happen, but I can see trouble because I have sampled opinions. Among the intelligentsia in Ekiti South, they are not happy and they are not even ready to hear that. And you know when the intelligentsia is not happy, they can forment trouble; they can start any uprising and the rest of it and before you know it, as I have stated before, the people might start having a divided opinion about the government and the party. I can bet it with you that any political party that zones it’s governorship slot outside Ekiti South will not get any vote from the zone in 2018. This is because the people are so annoyed that, for a very long time, this injustice has been going and nobody has been ready to address it.