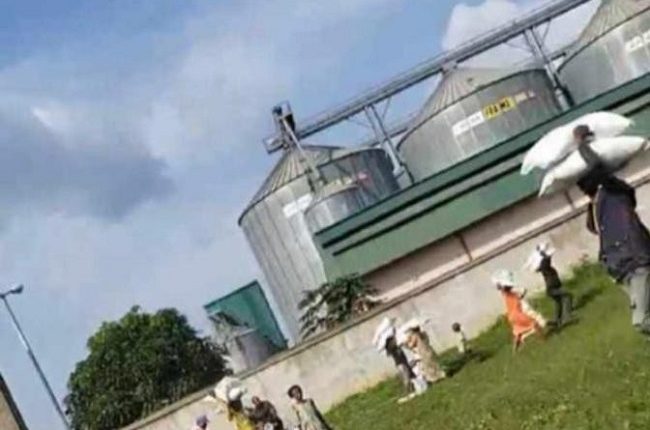 In what looks like a drama on Friday’s night and Saturday morning, the residents of Ekiti State attacked the federal government’s silos located in Ado-Ekiti and carted away fertilizers and seeds chemically preserved for planting while searching for Covid-19 palliatives.

Also attacked were State Emergency Management Agency warehouses, where materials stored as reliefs for flood victims were kept and the popular textile market located at Basiri area of the state capital was also attacked and materials looted.

The residents defied heavy downpour and attacked the silos located along  federal Polytechnic, Ado Ekiti around 8 pm and made away with items suspected to be poisonous and not consumable.

They were reported to have mistaken the fertilizers for garri and the preserved maize as consumable grains.

Sequel to cases of looting of Covid-19 warehouses in Lagos, Kwara and Osun States, where people made away with rice, beans, spaghetti and other consumables, the social media were awash with a rumour that some people were allegedly searching for where Covid 19 palliatives were stashed in Ekiti.

This prompted the government to issue a public announcement that all palliatives allotted to Ekiti had been distributed, with no leftover.

It was gathered that a large number of residents had boarded vehicles and motorcycles from far distances like Ijigbo, Ajilosun and Odo Ado Area of the metropolis to the area to perpetuate the looting.

This scenario was said to have caused traffic logjam along Ado-Ijan -Ikare road, as soldiers made spirited efforts to disperse the huge crowd of intending looters that massed at the scene.

Several persons were said to have sustained bodily injuries as soldiers reportedly deployed a minimal force to push away the crowd.

Sensing danger inherent in consuming such a killer commodities, the state government in a statement by the Information Commissioner, Mr Akin Omole warned that commodities being looted from the silos were poisonous.

The statement said: “Reports reaching us confirm that the Federal Government’s Silos, the Agric Development Programme (ADP) warehouse and the State Emergency Management Agency (SEMA) store, all in Ado- Ekiti, have been attacked by hoodlums under the guise of seeking CACOVID palliatives.

“Ekiti State has NO CACOVID palliative warehouse as all the palliatives have been distributed. The items being carted away are Single Super Phosphate fertilizer and NPK which they have erroneously identified as Gaari.

“The SEMA store has emergency supplies for disaster response e.g. flood, fire or any other emergencies.
Some are even making away with corns preserved for planting, with chemical pre-fermentation. All these items are poisonous and not fit for consumption!

“We appeal to our people not to consume these items because they can kill. Ekiti State has NO COVID-19 Palliatives warehouse as all palliatives have been distributed to members of the public during the lockdown period.”

Speaking with our Correspondent, the Police Public Relations Officer (PPRO) ASP Sunday Abutu confirmed the attacks on the silos and other places in the state capital, saying men of the command had been drafted to these areas.

“In fact, this is no longer protest but looting and it is unfortunate our people are attacking some of these places in search of foods and other items. It takes the prompt efforts of our men last night and this morning to prevent major havoc in these places,” he said.

The police spokesman noted that some persons have been arrested in connection with the various attacks on warehouses in the state capital.