Ekiti PDP crisis: Why I am promoting a faction ― Senator Olujimi 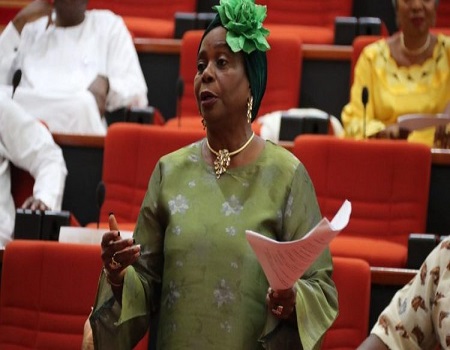 Tribune Online findings revealed that parallel Congresses were held at the weekend in the state where a former member of the Ekiti State House of Assembly, Bisi Kolawole and Kehinde Odebunmi emerged as chairmen.

Further checks revealed that Honourable Kolawole was the candidate of the former Ekiti state governor, Ayo Fayose, while Mr Odebunmi was backed by Senator Olujimi for the same position.

Speaking with newsmen in Abuja, Senator Olujimi said those against the imposition of party chairman by Ayo Fayose decided to conduct a parallel congress last weekend.

She said: “I take it as a great compliment that I’m leading a faction of a political party against a former governor in a cosmopolitan state like Ekiti.

“The truth of the matter is that I did not choose to lead a faction. Some people came together and said that they were against a particular way of handling the party. They were against violence, imposition, impunity and all forms that went against democratic tenets of the management of a political party especially as it has been exhibited severally in Ekiti State. Those who came together said they need a face to the movement, that is how I became the face of the movement.

I am not the only one. It is a collection of leaders of the PDP of which so many people are part of, including Senator Duro Faseyi and 12 other leaders.”

Senator Olujimi accused the national leadership of the party led by Prince Uche Secondus of giving undue advantage to the group led by the former Ekiti state governor.

“I believe that is the way the national body wants it because, from the start, Congress was bound to fail. A Congress that happened and three was no delegate list and no official of the Independent National Electoral Commission was on ground to supervise it. The police did not also give security backing and there was no sufficient information. The ward congress was not done but the National secretariat of the party gave former governor Fayose the opportunity to write names of delegates even in my senatorial district where he did not support me as the candidate of the party in 2019 National Assembly elections. “He wrote all the list and the party took it from him. The party asked us to concede two local government areas to him because my people did not allow his people to come in there. I have been the only one managing the party with my other colleagues. If the party had wanted to do a credible Congress, they should have done the three ad hoc delegates because that was what our constitution provided for.

“The list did not go, yet they said they held a congress to fill in the post. So, our group decided to hold parallel congress too if what the party wanted to promote were illegality and impunity. We will stand on what we have done until something major is done about it.

She, however, denied the allegation that she was being used by the incumbent Ekiti state governor, Dr Kayode Fayemi to instigate crisis in the PDP.

“I have not even spoken to him, the truth of the matter is that I am a person that fights for justice. I don’t care what the people say, it doesn’t matter to me. Even if he (Fayemi), is talking to me, why not? When the party where I have made such sacrifice did not see anything good in what we have done. So, if anybody else talks to me, it won’t negate anything. I am not being talked to but I am going to fight for justice, fairness and equity.

“The only way we can move forward is to call the former governor to order but everybody is dodging it. Nobody wants to do it but to massage ego. The minute that was not done, peace will elude the party in the state. Unless the party speaks truth to power, we will be where we are.

“At first, I thought when you put in so much on something and some people don’t want you, you leave but on second thought, I said it won’t be a person that would force me out of the PDP because I came in on my own volition. I am going to stay in it on my terms.”

But speaking with Tribune Online in a telephone interview, Lere Olayinka media aide to Ayodele Fayose maintained that his principal would not join issues with Senator Olujimi on her claim that the PDP NWC accorded recognition to the faction led by the former Ekiti state governor.
Olayinka recalled that a Court judgment had since dismissed the group led by Senator Olujimi as illegal.
He said: “It is not for us to say whether the congress that produced Honourable Kolawole was valid or illegal. The question to ask is,  which of the Congresses enjoyed the presence of the team sent by the national secretariat? It is not for us to make a pronouncement on that. We should all be patient and let the national secretariat take a position on that.”