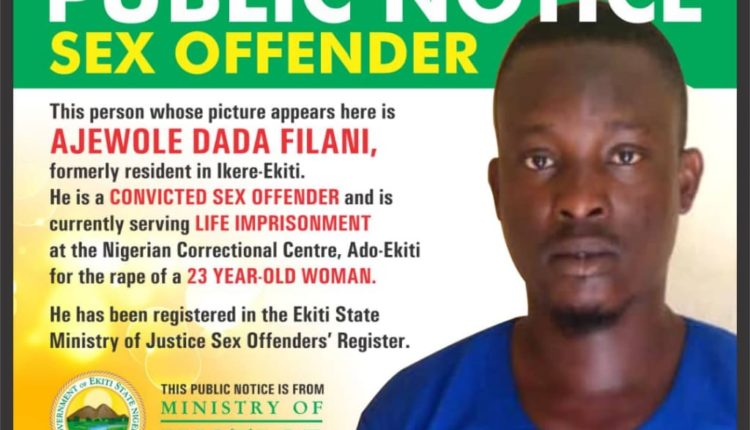 Ekiti State government on Friday published in its sexual offenders register the name and photograph of a young man who was convicted of raping a 23-year-old student of a higher institution in the state.

According to the state Ministry of Justice on its Facebook wall, the sex offender, Ajewole Dada Filani, a former resident of Ikere-Ekiti, is a convicted sex offender and is currently serving life imprisonment at the Nigerian Correctional Centre, Ado-Ekiti.

According to the photograph on the wall, Ajewole was convicted of the rape of a 23-year old lady and his has been registered in the Ekiti State Ministry of Justice Sex Offenders’ Register.

“In furtherance of the Ekiti State government’s policy of zero tolerance for all forms of sexual violence against women and children, the state’s Ministry of Justice has publicly name-shamed another sex offender, the ministry said.

The ministry said Ajewole appeared for the first time at the Ekiti State High Court on 16th November, 2016 and was sentenced to life imprisonment after kidnapping and raping his victim, a student of the College of Education, Ikere-Ekiti, on November 7, 2015, along Ikere-Igbara Odo Road.

This makes it the sixth sex offender publicly name-shamed by the state and have their names recorded in the Ekiti State Ministry of Justice Sex Offenders’ Register.

Godfatherism must end in Edo politics, says Oba of Benin