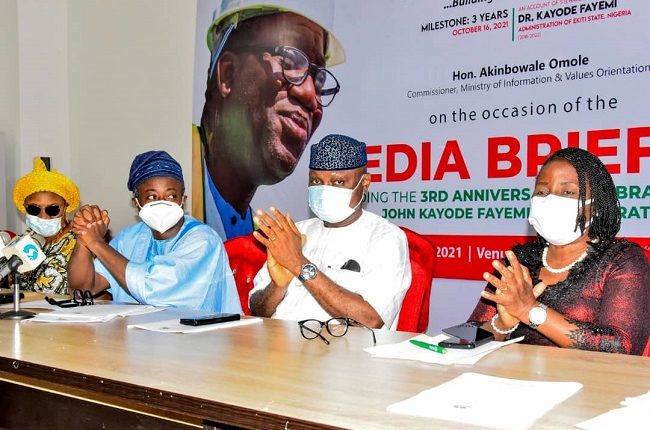 The Ekiti State government, on Thursday, revealed that public schools in the state have witnessed tremendous increase in enrolment due to the deliberate efforts of the Dr Kayode Fayemi-led administration since 2018.

The Commissioner for Information, Mr Akin Omole who stated this while addressing journalists to herald activities for the third anniversary of the present administration, tagged, ‘Consolidation’ noted that enactment of relevant laws and investment in human capital development necessitated the increase.

Omole added that the administration placed high premium on education in the state and that everything possible would be done including establishment of more schools for more children to have access to qualitative and affordable education.

He said, “I must emphasise that the decision of the administration to establish additional schools was not arbitrary but based on evidence-based needs assessment that showed population overcrowding in some existing schools and to cater for students in mission schools that have been returned to their original owners.

“Our policy as far as schools are concerned is that every child in Ekiti must have a school to attend within 3km from their place of residence.”

The commissioner maintained that the administration has in the last three years initiated projects and policies that would contribute in no small measure to the transformation of the state.

He disclosed that as part of activities of the third anniversary, the Vice President, Professor Yemi Osinbajo would on October 14 commission the new civic center in the state capital housing moseum, shopping mall, library and other things that would boost the state’s economy.

“Some of the large scale infrastructural projects facilitated by government’s partnership with development partners include the resuscitated Ikun Dairy Farm, Rice Mills in Ado Ekiti, Cassava Processing Plants in Oke Ako-Irele axis, rehabilitation of major dams, construction of interstate roads, ongoing Agro Cargo Airport, among others and the World Bank alone has executed over 635 micro-projects in all the 133 communities across the 16 local government areas in the state,” the commissioner added.

Also speaking, the secretary to the state government, Mr Biodun Oyebanji revealed that as part of measures to improve the state’s security architecture, a security initiative referred to as the safe city project would be inaugurated.

Oyebanji noted that this initiative would help in protecting the highway and the border against incursion from criminal elements, assuring the people that the administration is committed to ensuring maximum security of lives and property.

On the procurement of security drones, the SSG stated that the unmanned air surveillance would soon arrive in the state, noting that the necessary paper works and protocol are being finalised.

“The issue of drones is not a thing you can just pick over the shelves especially the one we need in Ekiti. It is being manufactured to specification and it will take some time but I can tell you it is on its way to the state from abroad. It will arrive soon because the governor has done a lot in the regard,” he said.

In spite of the huge investment in the water sector by the government and international organisations, water scarcity has grown to become a perennial nightmare for residents of Abeokuta, the Ogun State capital. This report x-rays the lives and experiences of residents in getting clean, potable and affordable water amidst the surge of COVID-19 cases in the state…    Ekiti govt announces increase in public schools enrolment