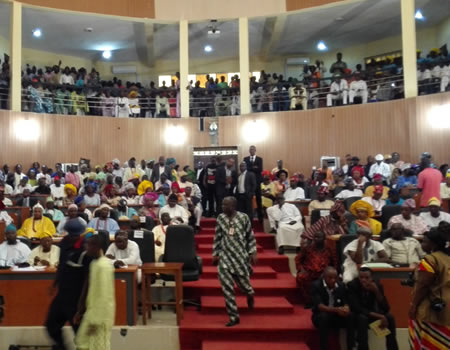 The Ekiti State House of Assembly has promised to initiate laws that will protect the state tourism sector from neglect by the government.

The Chairman House Committee on Culture and Tourism, Adeyemi Ajibade and its counterpart on Media, Yemisi Ayokunle said the law was needed to check occasional abandonment of tourism sectors, which they said cripples its growth and development especially in the area of harnessing its potentials.

The lawmakers disclosed this at the weekend while addressing newsmen in Ado-Ekiti, the state capital during a visit to Ministry of Culture and Tourism to catch a glimpse of rehearsal of the newly employed 32 young artistes.

Ayokunle called on local and foreign investors to take advantage of the vast tourism potentials in the state to boost its economy through revenue generation.

She noted there were lots of untapped potential in the tourism sector beckoning for exploitation, saying the Assembly has put in place various legislations create enabling environment for investors.

“For us, we are ready to work hand in hand with the Ministry. We will support you in every way. We will convince our amiable governor to procure a luxurious bus for you. This government must be continuity, we will ensure the person succeeding JKF is one who also values the works of Prof. Bakare. Nobody will see this kind of project and would want to kill it. We will make a bill that would make this Ministry undestroyable. Such a bill will make this place more dynamic and autonomous,” she assured.

Bakare exuded confidence that the state would soon realise the huge possibilities that flow from the preservation and showcasing of Ekiti cultural heritage to the world.

He said efforts were in the pipeline to launch Ekiti on the international grid of excellence by making epicentre of development and viable economically through huge investment in tourism and entertainment sector.

Commenting on the criticism against the employment of the 32 fresh graduates into the Ministry, Bakare clarified that the recruitment was a special arrangement approved by Governor Fayemi to rejig the Ministry after many of its former staff had either retired.

He said efforts were on to place the new artistes on insurance and health benefits schemes that are being enjoyed by members of the Nigerian Theatre Arts Practitioners (NANTAP) after their induction into the association soon.

Lessons From Fani-Kayode’s ‘Stupid’
The Femi Fani-Kayode experience was needless and plainly avoidable. But something tells me it won’t be the last. There is the feeling today in power circles that because of the ascendancy of the Internet and its platforms of social engagements, the press as we knew it is now impotent and could be humiliated and called stupid without consequences. The truth of the media’s undying powers should be clear in what Femi just went through…Ekiti Assembly

Buhari Approves Transfer Of NIMC To Communications Ministry
President Muhammadu Buhari has approved the transfer of the National Identity Management Commission (NIMC) to the Federal Ministry of Communications and Digital Economy. A statement signed by the Minister‘s Spokesperson, Mrs Uwa Suleiman, on Monday in Abuja, said that the approval was based on Buhari’s consideration for the critical role of NIMC towards the realisation of the objectives of the National Digital Economy Policy and…Ekiti Assembly Ekiti Assembly

Businesses May Not Normalise Till August 2021—Report
BUSINESSES and brands, hoping to return to ‘winning ways’ soon, after the devastating effects of the COVID 19  pandemic, may need to wait a little bit longer, as a recently-released CEO Report, from Philips Consulting Limited PCL,  has predicted that it would take another 12 months, August 2021, for the nation’s business environment to fully activate and operate optimally…Ekiti Assembly  Ekiti Assembly

Demise of Emir of Zazzau: I have lost a good friend ― Soun of Ogbomoso