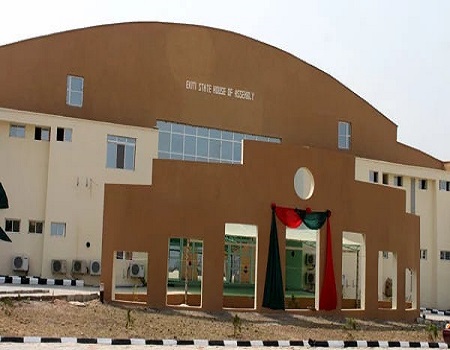 Share
The Ekiti State Assembly on Wednesday through a unanimous resolution passed the Ekiti Social Protection Bill, 2020 bill into law to ensure children and the vulnerable access to basic social services and infrastructure.
The passage followed when Honourable Olubunmi Adelugba, the Chairman of the Joint Committees on Finance and Appropriation, Women Affairs, Trade and Investments and Judiciary and Legal Matters, submitted her committee’s report to members of the Assembly, which was unanimously adopted.
According to Adelugba, the bill, if, eventually assent to by the Governor, Dr Kayode Fayemi would reduce poverty among the people vulnerable to being poor, provide guiding principles for managing social protection and programmes.

She added it would also enhance human capital development to ensure a life of dignity, promote social welfare, improve food security and nutrition and provide synergy and coordination among all social protection intervention agencies and Non-Governmental Organisation among others.
The Assembly also committed to its  Committee on Judiciary and Legal Matters,  Ekiti Law Reform Commission,(Amendment) Bill,2020 for further legislative scrutiny.
The House set aside Order Two Rule 11 of the Standing Order of SouthWest State Houses of Assembly in order to conduct the business of Wednesday’s plenary in English Language against the native language, Yoruba.
However, the Speaker, Funminiyi Afuye urged members, Nigerians to ensure that the country’s local languages do not go into extinction.
Afuye said Nigerians must ensure the promotion of the native languages, suggesting that the Standing Order manual would be interpreted in Yoruba Language.