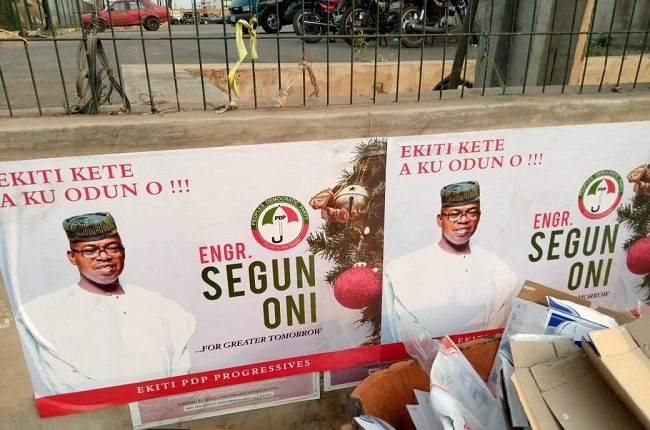 The governorship posters of the former governor of Ekiti State, Chief Segun Oni, have flooded strategic locations in Ado-Ekiti, Ekiti State capital city and other towns across the state.

Oni was the governor of Ekiti between May 29, 2007, and October 15, 2010, after which he was removed through a judgement delivered by former President of Appeal Court, Justice Ayo Isa Salami, in a case instituted by Kayode Fayemi of the defunct Action Congress.

The posters with the logo of the Peoples Democratic Party (PDP) carried a bold inscription, “Segun Oni for Governor, for a Greater Tomorrow.”

They were pasted in conspicuous places in Ado Ekiti metropolis like Ajilosun, Basiri, Ijigbo, Ilawe Road, Okeyinmi, and other towns such as Ikere Ekiti, Ifaki and vote-swinging communities across the 16 local government areas of the state.

The posters attracted so much attention that people clustered around to discuss the consequence of such on the politics of the state.

Some residents who spoke with Tribune Online said the former governor did creditably well when he was governor between 2007-2010 and that he was loved across party lines in the state.

A resident, Segun Olafusi said the PDP chieftain would be supported by many residents if he decides to contest in the poll next year, “considering his prudent use of resources when he was here.”

Though the Independent National Electoral Commission (INEC) has not fixed the date for the election expected to take place in 2022, the atmosphere in the state suggests the people are already preparing for the poll.

The last governorship election was conducted on July 14, 2018, where Governor Kayode Fayemi defeated the candidate of the PDP and the then deputy governor, Professor Kolapo Olusola-Eleka.

Speaking on the development, a former special adviser to Oni during his time as a governor and member of the media team of ex-governor’s political platform named ‘Atunse Ekiti’, Dr Bayo Arowolaju, said the posters must have emanated from those agitating for the return of his former boss as a governor.

Arowolaju added that the pressure on his former boss to return as a governor has been immense in the last one year, saying the posters should be one of those agitations.

According to him, “Well, as an insider in Atunse Ekiti group, I knew that Segun Oni has not formally declared his intention for the plum seat, but there are agitations from groups and individuals that he should take a plunge in 2022.

“These posters to us were just a call that the right person should be allowed to govern the state for the people to feel the dividends of democracy.”

Security, safety of lives and property, a collective effort ― Sanwo-Olu