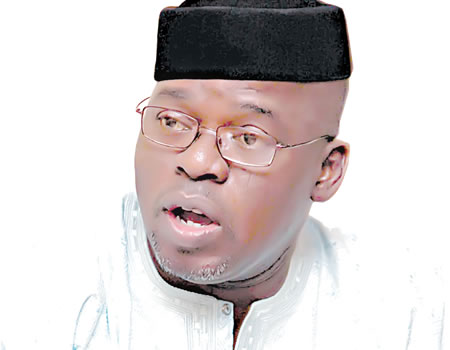 The former governor of Ekiti State and Peoples Democratic Party (PDP) governorship aspirant for the 2022 governorship election, Chief Segun Oni, has said the major opposition party will resist attempts by any party or group to rig the next year’s poll.

Oni also boasted that the party will galvanise supports from the members of the public to be able to dislodge the All Progressives Congress from the Ekiti government house, describing the voter apathy that dogged the last Saturday’s council polls as an indication of the nose-diving acceptability of the APC in the state.

The former governor spoke in Ado-Ekiti, the Ekiti state capital at a rally organised by a coalition of two groups, Ekiti PDP Progressives, led by Honourable Wale Ayeni and Dominion group spearheaded by Eniola Eponlolaye to mobilise the masses for the former governor ahead of the PDP primary slated for January 2022.

The rally was attended by a large number of party followers and admirers, who matched from the popular Fajuyi Park via Ijigbo to the Ajilosun area.

The long convoy of vehicles and party members guarded by combined forces of security agencies had caused a serious traffic logjam along Ado-Ikere road for over three hours.

Addressing the crowd of party supporters, the former governor, said his popularity keeps soaring among the masses of Ekiti on the premise that he didn’t loot the treasury while in the saddle of governance between 2007 and 2010.

Speaking about the primary, bearing in mind that former governor Ayodele Fayose had endorsed the candidacy of Bisi Kolawole, Oni averred that the party members know the right man that can win the election and would not want to gamble with the choice of candidate.

Oni expressed confidence that he would triumph in the poll if given the party’s ticket, while also assuring that the national leadership of the party would be fair to all aspirants in the conduct of the primary.

“PDP doesn’t want to lose and the people who will vote at the primary know who can win for us. Though I am contesting with the aim to get the ticket, but I won’t be a desperate person to achieve this. If you gauge the mood in town now, Ekiti is friendly with PDP and we shouldn’t miss that opportunity.

“This really was conceptualised to send a signal to APC after the wishy-washy local government elections of Saturday.

“It is wisdom for whoever becomes governor not to get to office and loot. If I had looted, I would not have been popular and acceptable as I am today in Ekiti. Rather than looting, spend the money for the people by way of good roads, water, good schools, scholarship and all that, so that they won’t forget you.

“PDP is a strong force and party in Ekiti and I am of that view that our national leaders would do the right thing in our primary. We don’t want to pick a candidate that would be too weak to win.

“PDP is not planning to rig and that is why we must get the right candidate, but we will resist and botch any attempt to rig the election. What you are seeing today was a signal that we are ready to take over Ekiti.

“Those who did vote-buying in the past are regretting it now. They are even raising curses and abuses on those who gave them money and now fumbling in government.”

Oni described as erroneous thinking, the fear that Fayose was firmly in charge of the State Working Committee, led by the Acting Chairman, Hon. Lanre Omolase.

“Nobody is controlling the SWC. You will be insulting the gentlemen and ladies for you to say they are being controlled by anyone. To me, they are independent-minded people, who should see building Ekiti PDP as their main focus,” he said.

Verdict: The claim is false. The content of the article published by these online platforms is not new; it has been recirculated several times and has been debunked.Ekiti 2022: PDP’II resist attempt to rig poll ― Segun Oni