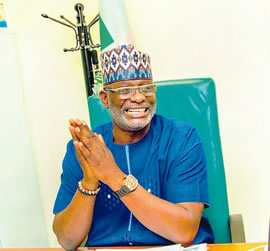 Ahead of Thursday’s governorship primary of the ruling All Progressives Congress (APC), a member of the house of representatives and aspirant, Honourable Femi Bamisile, has revealed that the party should forget winning the June 18 poll, if it picked a candidate outside the southern senatorial district.

The chairman of the house committee on FERMA who spoke in Ado-Ekiti, the state capital on Sunday noted that the people of the South can no longer tolerate the conspiracy being contrived against them by the political class, with the way they were being ostracised from the political equation and insulated from producing the governor since 1999.

According to him, the decision of the governor, Dr Kayode Fayemi, to anoint aspirants outside the zone was a breach of the agreement he had with the southern zone when campaigning for votes in 2018.

Bamisile said: “I don’t disagree with Governor Kayode Fayemi for anointing one of the aspirants, but the process for the emergence of such person must be credible and transparent. Let me restate here, if Governor Fayemi had come to the South to pick a councillor as his candidate, I will not be contesting this election.

“It is not dignifying for the governor, who campaigned and promised Ekiti South governorship ticket in 2018 after his four-year tenure to change the goal post in the middle of the game. But I know that the conspiracy against the South will fail this time.

“I am optimistic that one of the three aspirants from the South will win the APC primary, but peradventure anyone emerges that is not from the South, that will be bye-bye and end to APC in Ekiti. I have visited everywhere and I know what the people of Ekiti were saying. They are ready for a southern candidate in APC.”

The former House of Assembly Speaker stated further that he stood by the direct mode of primary adopted by Governor Mai Mala Buni-led national caretaker committee for the conduct of the Ekiti APC primary because it is democratic.

“The party members could attest to the fact from that I have stood by direct primary since day one. I am a member of the House of Representatives and I knew the step we took jointly with the Senate to ensure that direct mode of primary is contained in the Electoral Law in the amendments we undertook, so I am firmly in support of direct primary.

“I don’t support the idea of an indirect or delegate system where a few people will sit down somewhere and determine who becomes the governor. This makes the process prone to manipulations and more expensive.

“That was why we said those who don’t have money but are of Ekiti origin with credible characters should be given the opportunity by allowing the candidacy to be determined by all party members,” the lawmaker said.

Bamisile appealed to the party members and aspirants to allow peace to reign during the primary.

To prevent a rancorous primary, the lawmaker advised the national leadership of the party to deploy those who are independent-minded and who wouldn’t pander to dictation to conduct the credible primary in Ekiti on Thursday.

“We are hopeful that this primary will be free and fair. If we want our party to still remain relevant in the eyes of Nigerians, we have to be justiceable in all our dealings. Those of us from the South won’t allow anyone to take the governorship away from us this time,” he stated.