Ekiti 2018: I offer to stay away from primaries for peace ―Fayose 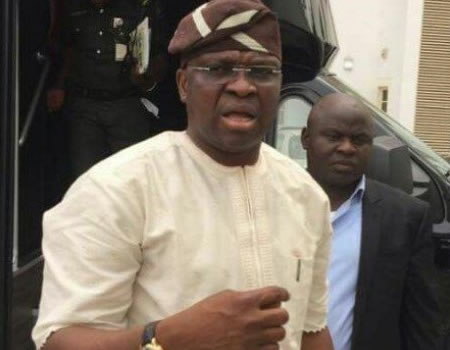 GOVERNOR Ayo Fayose of Ekiti State has offered to vacate the state or stay away from the governorship primaries of Peoples Democratic Party (PDP) scheduled for May 8, 2018, to buttress his neutrality in the coming polls.

Governor Fayose spoke in Ado Ekiti, on Wednesday while welcoming the national chairman of the PDP, Prince Uche Secondus, former Senate President, David Mark and other leaders of the party, who were in the state to reassure the party faithful of their desire to conduct free and fair primaries.

They had come to Ekiti as a follow-up to an earlier meeting in Abuja to mediate in the crisis generated in the party by Governor Fayose’s support of his deputy, Professor Kolapo Olusola, for the governorship.

He, however, noted that whether he was absent or not at the primary, this would make no difference as any candidate he supports stood a better chance to carry the day.

The governor, who described himself as “the only reigning professor of politics in the state,” said without attempting to play God, he was aware he could win the election without being physically present on the day of the election.

He reiterated his support for his deputy to emerge as the candidate of the party in the July 14 election but said such backing of his deputy did not stop others equally interested in seeking the ticket.

He said: “If other aspirants are not comfortable with my presence on the day of the primary, I am ready to vacate the state if that will usher the needed peace.

“What I know however is that with God almighty behind me, I will still come back to receive certificate of victory from my people.”

Earlier in an address to the crowd that welcomed the leaders of the PDP, Prince Secondus reiterated that all stakeholders, especially all the governorship aspirants, of their determination to be unbiased in the conduct of the exercise.

Secondus said: “I assure you once again, there will be transparency and the process would not cheat anybody. I urge you to join the leaders to work together to ensure free and fair transparent primaries, eminent Nigerian are conducting the primaries.

“We urge you to remain calm. We also urge INEC and security agents not to be partial but come to defend democracy. Doing that the best if our people will serve the people the best. From here we are moving to other parts of the country for sensitisation.”

Also speaking Senator Mark, who was the chairman of the reconciliation committee, said: “First is that I have been working on bringing peace to Ekiti by reconciling all parties and that has been done very well. I thank you supporters for the peace and agreement to work together.

“Secondly is to assure you that the process leading to the final election of whoever will become PDP candidate in Ekiti for the July poll will be free fair and credible. If we are insisting that INEC must be fair, it means we will have to do so ourselves at the party level. Nobody will write delegates’ names. Everyone will vote for the candidate of his choice.

At the meeting were the deputy governor, Professor Kolapo Olubunmi Olusola, Senator Biodun Olujimi and Prince Adedayo Adeyeye, who are all aspirants in the election.

Rivers govt to sue FG over prevalence of soot