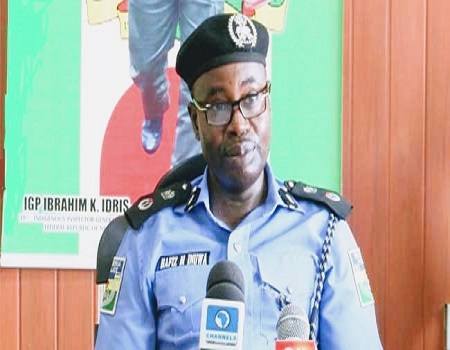 Eight members of the proscribed Indigenous People of Biafra (IPOB) from Ebonyi State have been arrested for burning public structures in Koka junction area of Asaba, Delta State capital during the #EndSARS protest in October.

Parading the suspects at the state police headquarters in Asaba on Thursday, the Police Commissioner, Hafiz Inuwa, said the suspects who resided in Koka disguised themselves as #EndSARS protesters before setting the structures ablaze.

Properties burnt by the IPOB members, the police boss said, include the high court buildings along Ibusa road, the recreation park and Federal Road Safety Commission (FRSC) and other public facilities.

According to him, a tricycle belonging to one of the suspects which was used in conveying used tyres and petrol to the scene, a Nokia mobile phone taken from a victim have long been recovered, adding that efforts were being made to arrest other gangsters still at large.

In a similar vein, one Lucky Felix of Mile 5 in Asaba who confessed his involvement in the burning of Akwofor police post, the high court complex, and other atrocities during the #EndSARS protests.

The commissioner of police said Felix was arrested while a gun and two cartridges stolen from the high court store with the court exhibit registration number still on them were recovered.

The commissioner disclosed that three suspects including one Lucky Ebhonun Godstime who sold his four-year-old son to one Ebere Frank alias Chairlady at Agbor last year for the sum of N300,000 has also been arrested.

The buyer was said to have re-sold the child to one Stella Ifeoma Adiegwu in Onitsha, Anambra State for N750,000.

The boy, Daniel now 5 years old has been recovered and taken to an orphanage for care and custody.

He added that one Joseph Afia of Mereje Community was arrested with a sack containing suspected dry human skull and bones at Egborode in Okpe council area of the state.

On interrogation, Inuwa explained that the suspect confessed that he exhumed the human parts from a cemetery.

During the period of review since June 2020, Inuwa said kidnapped cases were 12, armed robbery 27, cultists 25, while arson and child stealing recorded are 8 and 9 respectively.

Seven AK47 rifles were recovered from criminals during the period.