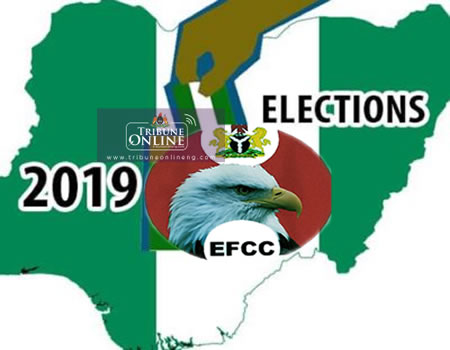 The Economic and Financial Crime Commission (EFCC) has called on bankers and bureau de change operators in Benue State to report any suspicious transactions of the large volume of money within this electioneering period.

The anti-graft  Zonal Head in Makurdi Zonal Office, Johnson Babalola gave the charge yesterday during a meeting with bankers and bureau de change operators in his office.

Babalola said that the Commission got an intelligence report that politicians were moving a large volume of money to buy vote.

He noted that the commission is committed to getting the democratic system right by ensuring that no bank or bureau de change agent compromises the order.

Babalola said that a team from the Commission’s headquarters in Abuja were on ground in the state to monitor bank transactions as well as other financial transactions including those who were burying dollars.

ALSO READ:2019: EFCC promises to stop use of illicit fund to finance election

The zonal head also warned the bureau de change operators of the fake dollars in circulation.

“For now, don’t accept huge sums of cash from anyone. We are in the electioneering period and money laundering act must be followed if we want the democratic process to succeed. We got a report that politicians are moving money in large volumes around.

“That is why we had met with bureau de change operators and bankers and told them the consequences of not obeying the law. If anyone is moving large sums of money with the aim of aiding and abetting vote buying, we will go after them.

“Development in any nation rests upon a solid democratic foundation. There can be no development without peace and there can be no peace if the democratic system is compromised. We cannot develop when the country is under serious unrest. We are poised in EFCC to see to it that the nation’s democracy succeeds.

“We have told the bankers the evils of compromising the system in connivance with politicians. The limits of transaction according to money laundering act is that as an individual, you cannot withdraw more than N5 million and N10million for corporate organization in one day.

“Anyone who works in contravention to the rules would face the penalty. What we did was just to remind them that the law still stands and we will make sure the laws and the rules and procedures are followed to the latter,” Babalola stated.

I have no plans to Islamise Nigeria ― Buhari