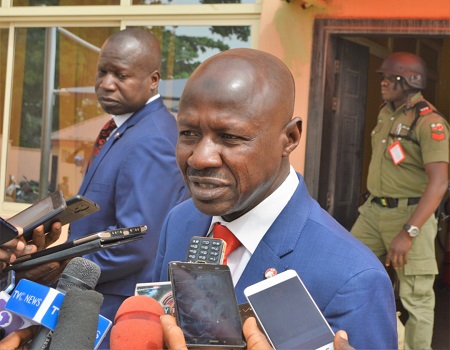 The acting Chairman of Economic and Financial Crimes Commission (EFCC), Mr Ibrahim Magu, said, on Monday, that the commission had secured 1,266 convictions from January 2019 till date.

Magu disclosed this at a press conference marking the passing out parade of the Detective Inspector Course Five of the EFCC, at the Nigerian Defence Academy (NDA), Kaduna.

He explained that the commission secured 1,218 of the convictions in 2019 and 48 this year.

Magu said that in the last four years, EFCC had secured an unprecedented number of convictions.

He said that the commission also recovered billions of naira, millions of dollars and pound sterling as well as other foreign currencies.

“We have also handed over several forfeited properties to government agencies, thereby saving the nation billions of naira in rent.

“The profile of convictions we have secured is quite heavy; they involve former governors, captains of industry, former military chiefs, oil subsidy merchants and scores of players in the private sector.

“We are not relenting in our crusade and it is important that every Nigerian jump into the bandwagon of anti-corruption fight,” he added.

He said that the passing out parade was the peak of months of intensive and extensive military training and grooming of the cadets, in preparation for their challenging and exciting career as operatives of the commission.

The acting chairman said that EFCC was training officers who could not be intimidated by challenges, discouraged by threats or defeated by any obstacle that might come their ways in the course of their career.

“Corruption is a mountain and it can only be broken by prepared men and women of valour and virtues, as everything that went into the training of the graduating cadets was necessary for their fitness.

“Nigeria shall never be corrupted because we will not give up and we will not surrender to the forces of darkness and greed in our midst,” he said.

Magu promised that the commission would never relent in its efforts to rid Nigeria of all forms of corrupt practices.

Man, 31, sentenced to 3 years in prison for stealing cows