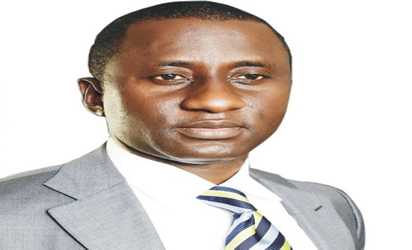 The Economic and Financial Crimes Commission has released Uche Ogah, a former Abia State governorship aspirant who was arrested today within the premises of the Tinubu Magistrate Court Lagos.

Ogah was invited  by officials of the EFCC after the Nigeria Police withdrew the forgery allegation against him on the grounds that the charge against him was preferred hastily without evidence.

Ogah’s Lawyer, Mr. Monday Ubani in a statement said his client was released unconditionnally few hours after he made his statement to EFCC.

Ubani said  that the commission was influenced into carrying out the embarrassing invitation of his client based on false information by the petitioner.

According to Ubani, the complainant in the forgery charge against his client, one  Mrs. Bridget Adeosun had forwarded the same petition which she sent to the police to the EFCC and misinformed the commission on a lot of issues.

The statement by Ubani states: ” The invitation of Uche Ogah by officials of the EFCC this morning at the premises of Tinubu Magistrate, Lagos to say the least is the most shocking turn of event in an over five  months trial over a trumped up charge.

“In vindication of my clients innocence, the police prosecution this morning informed the court of his intention to discontinue the forgery charge against my client.  Accordingly, the presiding magistrate, Mrs Kikelomo Ayeye struct out the charges and discharged him.

“Just as my client was stepping outside the court, officials of the EFCC invited him and took him to their office.

“At the EFCC office, we were confronted  with a petition written by same Mrs Adeosun who coincidentally is also the complainant in the forgery charge that was earlier struck out by the magistrate court.

” We presented the same submission we made before the police to the EFCC which is that the subject matter in the forgery allegation bothers on a pure business transaction which my client had with Mrs Adeosun. We showed the commission’s officials documents about the business transaction and agreements reached by parties in the business. The EFCC was shocked that these documents were never given to them where she received her payments.

” After reviewing our presentation, EFCC officials asked my  my client to go home and  come back another day

to have interview with the petitioner,” the statement said.

The other defendants in the charge which the Police withdrew against Ogah were his company, Masters Energy Oil and Gas Limited; and an ex-employee of United Bank for Africa, Deji Somoye.

The defendants were accused of conspiring with some persons still at large to forge a Memorandum of Understanding between Masters Energy Oil and Gas Limited and Mut-Hass Petroleum Limited sometime in March 2011.