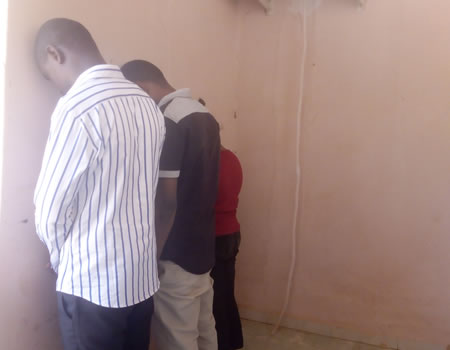 The Zonal Director of the Commission, Abdullahi Lawal, while addressing journalists in his office on Friday said one Zarahadeen Ibrahim connived with two of his colleagues, Ngozi Agbonjari Juliet and Michael Alabi of same bank to transfer money illegally.

“Analysis carried out on Fadima Ahmad’s account showed that the deposit were withrawn through POS machines at Gwadabawa area of Sokoto.

“When arrested, the POS merchant identified one Zarahadeen Ibrahim conspired with his colleagues to processed ATM cards on behalf of the duo to withdrew the monies through his POS”

He further disclosed that a total sum of N652,000, being the shares of Ngozi and Michael has been recovered, while efforts is being made to recover the remaining N553,000 from Zarahadeen Ibrahim.

Also paraded is one Abdulwahab Ibrahim Mayowa, who transfer the sum of N47,000 from one Paulina Asogba, through her ATM details.

“Mayowa visited the complainant home, where he took her phone and ATM card, he was able to transfer the money by using the last six digits of her ATM card without her consent”.

Lawal further disclosed that one Bello Matsala Umar of defrauding one Abdulrahman Abdullahi to the tune of N450,000 for land situated at Kalambaina Motor park.

According to the statement, “he informed the complainant that the management of the market desired to sell the land to prospective buyers at an affordable price of N450,000 and also collected another N30,000 as agency fees, but all efforts to take possession of the land proved futile.

“Upon arrest of the suspect, he admitted that there was no vacant land for sale, while sum of N50,000 has so far recovered from the suspect” he added.

He urged residents of the state to be are of whom they relate with especially on vital information about them.

He also disclosed that all the suspect will be arrange in court immediately after the completion of their investigations.