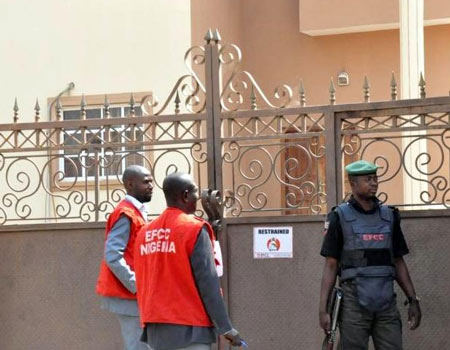 The operatives, who arrived the estate at exactly 11:00 a.m with

a White Toyota Hilux with Number Plate Niger AJ 596 BDA, left at about11:47 a.m, after combing through the estate.

Panic-stricken residents of the estate were initially shocked at the entry of the operatives accompanied by a police officer, but the chairman of the Winning Clause Estate Residents’ Association, Mr Mike Arowosegbe, told newsmen that the operatives informed him that they were on a search-visit to the estate and that their mission was not to seal off the Estate office.

He stated that the operatives were on sight assessment mission following their investigations into affairs of the estate.

Members of the Winning Clause Estate Residents Association had petitioned the EFCC alleging that the promoter of the Winning Clause/ City of David Estate, Mrs Obiageli Okwubanego,  had allegedly collected about N2 billion from the subscribers without developing the estate.

It was gathered that the EFCC had earlier interrogated Mrs Okwubanego, alongside other affected stakeholders in the estate, even as the estate association chairman also confirmed that members of the association have also been interrogated by the EFCC in furtherance of the investigation.

Why we banned NURTW in Oshodi —Lagos commissioner