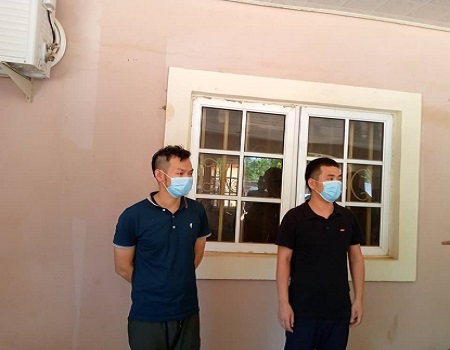 The Economic and Financial Crimes Commission (EFCC), has apprehended two Chinese nationals for attempting to bribe its officials, Sokoto zonal office and his investigating team.

“Four days after a series of discussions, it was agreed that I should come for half of the money, which was ready, at their office/residence, along Airport Road, Kasarawa, Sokoto.
“In a well-coordinated operation with a team of operatives, Mr Meng Wei Kun and Mr Xu Kuoi, were arrested while giving the bribe money to me at the above address. In the process, the sum of fifty million naira, three laptops, five smartphones and some relevant documents were recovered,” the EFCC zonal head narrated.
When investigations is concluded, the duo will be charged to face prosecution in court.
Lawal further explained that China Zhounghao Nig. Ltd is currently being investigated by EFCC Sokoto zonal office over alleged offences of conspiracy, abuse of office, misappropriation, diversion of public funds and money laundering.

The money involves the sum of over fifty billion naira contracts awarded to the company by Zamfara state government, between the period of 2012 to 2019, where the company received payments of over forty-one billion naira, and about sixteen billion naira, equivalent to over fifty-three million dollars, was diverted and traced to Bureau De Change operators.

Consumers must get value for money, FG tells service providers