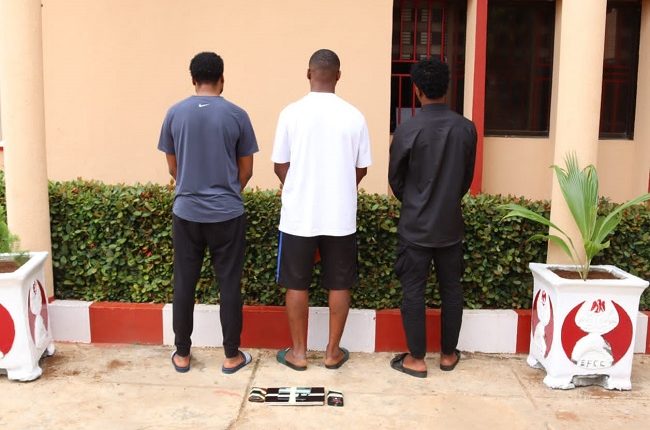 Operatives of the Ilorin Zonal Command of the Economic and Financial Crimes Commission (EFCC) have arrested three internet fraud suspects at the Ilorin International Airport as part of its renewed onslaught against corruption and illegal movement of cash through the nation’s airports.

In a statement by the Head, Media and Publicity of the antigraft agency, Wilson Uwujaren, the suspects are identified as Olawale Ipadeola, Opeyemi Badmus and Wasiu Babatunde.

The suspects were arrested on Monday morning, August 8, 2022 except for Wasiu whose arrest happened on Saturday, August 6, 2022 following actionable intelligence.

“Two of the suspects (Olawale and Opeyemi), who flew in from Lagos landed at the Ilorin airport around 11:56hours on the waiting hands of the eagle-eyed operatives of the EFCC at the airport.

“Preliminary investigations about their activities have shown that the suspects possessed several fraudulent documents on the devices.

“Upon interrogation, the suspects confessed to the crime and admitted ownership of different brands of phones and laptops recovered from them at the point of arrest.

“The suspects will be charged to court upon the conclusion of the ongoing investigations.”