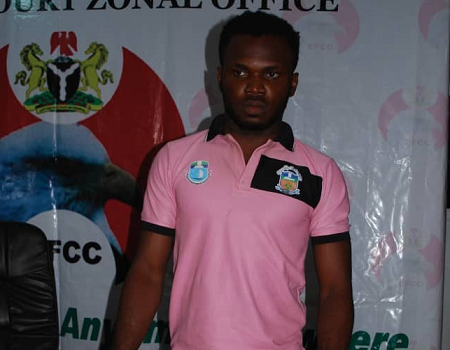 The Economic and Financial Crimes Commission (EFCC) Port Harcourt Zonal Office, on Thursday, said it has arrested a blogger, Dikeocha Chukwuebuka, who, it said on his Twitter handle @TheRealDayne, posted a picture which he claimed is the Port Harcourt office of the EFCC.

This was announced on the EFCC official Twitter page.

The suspect had tweeted the pictures of a crowded cell, a post which he has now deleted, and tagged it the commission’s facility in Port Harcourt.

Additional Information….
I was made to know that this is an Everyday thing, that @officialEFCC zonal office in PH keeps this people here, under the rain and sun, Night and Day, they do not have internal detention centre, where they can keep them when the weather is unfavorable.

Recall that the agency had, on February 12, debunked the report and vowed to arrest Chukwuebuka for promoting fake “EFCC Cell” news.

The Economic and Financial Crimes Commission, EFCC, has vowed to apprehend the promoter of a report in the social media, claiming its Port Harcourt holding facility is overcrowded and alleging mistreatment of detainees.
1/ pic.twitter.com/179BVxZrLU

He said the suspect was picked up at about 4 pm on Wednesday, February 26 in the premises of a new generation bank on Ada George Road in Port Harcourt.

According to Imam, the arrest was a fulfilment of the vow he made to track and apprehend the author of the malicious tweet.

He said the tweet was “most embarrassing moment for the Commission, given that the ‘fake news’, represented the very opposite of what the EFCC stands for, as far as care of detainees is concerned.

“I want to assure the suspect and indeed the media, that the Commission will follow through this investigation and ensure that justice is served in accordance with the law,” he said.

Imam also warned that social media influencers be circumspect in using information which they have not checked to save the society from the ordeal of fake news.

Chukwuebuka admitted that the picture published was an error attributing the picture to belonging to another agency.

He also apologised to EFCC and his followers for the false and misleading report.

Gas flaring to attract stiffer penalties from next year ― Senate