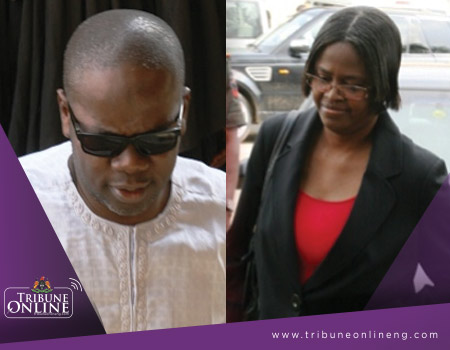 Abdullahi Alao, the son of Abdulazeez Arisekola Alao, the late Ibadan based business mogul, and the deceased Managing Director of Majope Investment, Mrs Opeyemi Ajuyah were on Thursday, re-arraigned before an Ikeja High Court on a eight count charge bordering on fuel subsidy fraud and forgery.

Mrs. Ajuyah, who was facing charges alongside the other defendants in the N1.1 billion fraud, died in January 2017.

At the last adjourned date, Ajuyah’s counsel, Olanrewaju Ajanaku informed the court that they were trying to get the deceased death certificate.

He explained that the husband of the Mrs. Ajuyah was out of the country and that the death certificate will be provided as soon as he returned.

“The moment he comes back we shall send the death certificate to the prosecution,” he said pleading for more time from the court.

The name of the deceased has however not been expunged from the charge.

Arisekola and his co-defendants were first arraigned in 2012 for conspiring on February 14, 2011, to obtain N1.1 billion from the Nigerian government by claiming the sum as subsidy for the importation of 15 million metric tons of premium motor spirit.

In May 2015, the EFCC amended their earlier six-count charge to an eight-count of forgery and conspiracy, and re-arraigned the defendants.

The Commission accused the defendants of forging a bill of laden, cargo manifest, and other documents to perpetrate the N1.1 billion fraud between January 2011 and April 2012.

According to the EFCC prosecutor Mr. S.K Atteh, the offences contravened Sections 1(3) of the Advanced Fee Fraud and Other Fraud Related Offences Act of 2006. They also violated Sections 363(a) and 364 of the Criminal Law of Lagos State.

The defendants had pleaded not guilty to the charges when they were re-arraigned for the third time on Thursday.

Counsel to the first and second defendant, Ajanaku informed the trial Judge, Justice Lateefa Okunnu that he still has more witnesses to call in the ongoing trial.

The witnesses were however not in court and the Judge consequently adjourned the matter till May 13 for the trial to continue.