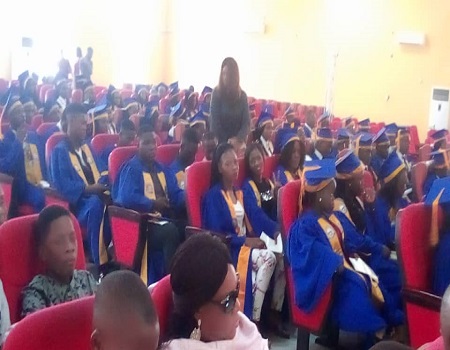 EDWIN Clark University (EDU), Kiagbodo, last Friday, matriculated 150 students into various programmes with a charge to students to shun cultism, immorality and other vices inimical to their success.

Vice Chancellor of EDU, Professor T. O. Olagbemiro, gave the charge after receiving the new students to the institution at the Fourth Matriculation for the 2018/2019 academic session held at the Edwin Clark University Auditorium, Kiagbodo, Burutu Local Government Area of Delta State.

“As you begin your academic year in this institution, there will be no room for cultism, acts of immorality, examination malpractices, bullying, intimidation, discrimination, dereliction, insubordination, hooliganism, gangsterism, improper dressing, or other forms of youthful exuberance usually associated with students.

“You must shun these vices as you would shun a leper,” he warned, adding that unholy relationships and addiction to drugs should be alien to them.

He urged the elated students to maximise the serene environment, which is conducive for learning and character formation, to acquire knowledge and development from a citadel of learning that, he said, was in a good working relationship with Coventry University, United Kingdom (UK), Chicago State University, Chicago, USA and Reinhardt University, Waleska, Georgia, USA.

Prof Olagbemiro, at the colourful event, disclosed that besides the university being given full licence to operate, 14 academic programmes in three faculties viz: Humanities, Social and Management Sciences and Sciences, had been fully accredited by the National University Commission (NUC) in 2018.

The don added that the institution, which kick-started in 2015 with only two faculties, has rapidly expanded to establish Faculty of Law and Faculty of Agricultural Sciences in 2016 and 2017 respectively.

He further disclosed that the university is perfecting its application to the NUC for the establishment of the Faculty of Basic Medical and Health Sciences which will take off in 2020.

According to him, two non-awarding programmes, Joint Universities Preliminary Education Board (JUPEB) and the Foundation Programme meant to serve the yearnings and aspirations of university-education seeking youths, have been set up.

He expressed joy that through the two pre-degree programmes, EDU “is fulfilling its mission and vision by ensuring any young Deltan and indeed, Nigerian, who has a thirst for education, is given an opportunity to fulfil his or her ambition.”

Meanwhile, two of the matriculating students, Joy Oghenerukevwe and Silver Ediri Francis, admitted to the Mass Communication and Law departments, expressed happiness at the event, vowing to graduate with a first class degree through discipline, hard work and dedication.

Dignitaries at the event included principal officers of the school such as the registrar, Mrs Rosalyn Egborge, who administered the oath on the matriculants, the chaplain of the institution, Pastor James Ugbede, representative of the founder of the school, Dr Rebecca Clark, Dean of Faculty of Law, Professor UN Ngwakwe, Dean, Faculty of Sciences, Professor Samuel Ugboloue, Professor Juliana Okoh, members of staff, and parents and guardians of students, among others.

Flood: Pupils stay away from school in Delta