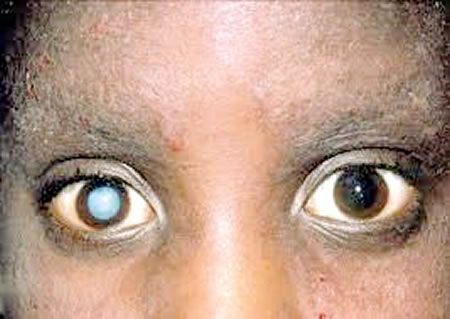 Experts, in a study, have called for education of mothers on ways to detect cataract in children to promote its earlier detection and treatment to reduce blindness from childhood cataract in resource-poor countries, Nigeria inclusive, where screening programmes are few or non-existent.

The researchers, in a review of children with cataract between 2011 and 2015 at the University College Hospital, found that the average age of children aged 0 to 16 years presenting with cataracts at the hospital is higher than in high-income countries. Their complaint was a white speck in the eye(s) or poor vision.

They evaluated 164 cases, 52.4 per cent of them were boys. Seventy-four (45.1 per cent) children had congenital cataract, 31.1 per cent had developmental cataract, and 21.3 per cent had traumatic cataract. The child’s mother detected the cataract in 116 (70.7per cent) of these cases.

The boys who had congenital cataract were brought to hospital at a younger age compared to girls.  Developmental cataracts were detected at a younger median age in girls, but for traumatic cataracts, the median ages at detection and at presentation were the same for both males and females.

Only 55 (33.5 per cent) of the children had presented within three months of detection for congenital cataract or within six months for other types of cataract. Among children with congenital cataracts, those whose mother detected the cataract were more likely to present within three months of detection and also at a younger age when compared to the children whose cataract was detected by other caregivers

The researchers declared that efforts at establishing sustainable case detection mechanisms in the communities will ensure early detection and referral to treatment centres.

According to the researchers, “Moreover, interventions that involve the integration of screening into primary health care activities such as immunization are likely to be quite useful in ensuring early detection.”

Cataract is the most important cause of treatable childhood blindness. Blindness from childhood cataract is a huge challenge in terms of economic loss, social burden and morbidity, with an estimate of about 200,000 children blind from cataract worldwide and about 20,000 to 40,000 children born each year with congenital cataract.

The outcome of treatment is influenced by the time of presentation of the patient, time of cataract surgery and prompt optical rehabilitation; with a higher risk of stimulus deprivation amblyopia when treatment is delayed.