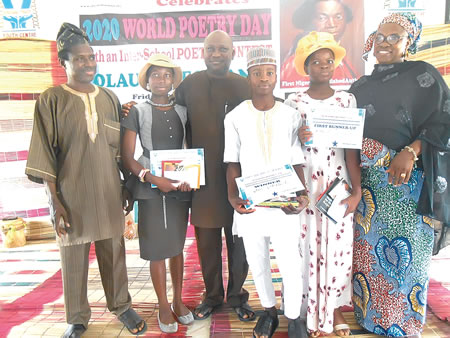 THE Educare Trust recently organised a poetry contest for secondary school students in Ibadan, Oyo State, to celebrate this year’s edition of the World Poetry Day, and it was an opportunity to develop the literary skills of contestants.

The focus of the contest was on the anti-slave trade activist and author, Olaudah Equiano.

During the contest, the students first read their poem to the audience before performing it.

An official of Educare Trust, Folorunsho Moshood, said the contest was to first celebrate the 2020 World Poetry Day, celebrate the life of the subject, Olaudah Equiano, and to also build the literary skills of the contestants.

“We hope this poetry contest will also help the contestants know more about the first Nigerian author, Olaudah Equiano, who was sold into slavery and later secured his freedom and waged a war against the anti-social activity.

“We are happy that Bono Energy sponsored this poetry contest, and it will go a long way in developing our future literary geniuses,” Moshood said.

Another official of Educare Trust, Afeyodion Raphael, said the organisation would also be holding further contests by June or July.

“The contests will still be on Olaudah Equiano, but it will be in another genre of literature, like prose or drama,” he added.

A member of the panel of judges, Ebika Anthony, charged the contestants to look at publishing their own books, “as Olaudah Equiano is being remembered today because of his literary works.

“Literary works make you live forever, and a good example is Olaudah Equiano, whom we are celebrating today. He died several years ago but because of his works, we are still remembering him today.”

Other members of the panel of judges include Mr Jare Ajayi and Mrs Tawakalitu Abdulsalam.

After the contests, an official of the Oyo State chapter of the Association of Nigerian Authors (ANA), Alhaji Mubashiru Abdulsalam, called on the contestants to join ANA in order to continue to develop their literary skills.

Alhaji Abdulsalam said the teachers and parents of the contestants would be notified of the extension of ANA membership to them so that they could support them in their literary journey.

In presenting the awards, Mr Afeyodion, thanked Bono Energy for the support, while commending the contestants for performances.

Those light flashes may be from glaucoma!