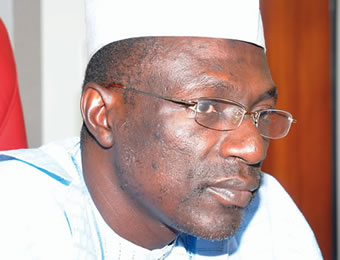 The crisis in the Peoples Democratic Party (PDP) took a different dimension on Thursday, as the Federal High Court in Abuja, restrained the Independent National Electoral Commission (INEC) from accepting list of candidates for the governorship elections in Edo and Ondo from other leadership of the party, except from the Ali Modu Sheriff-led National Working Committee (NWC).

Justice Okon Abang, in a ruling on Thursday, also granted an order of interlocutory injunction restraining INEC, the PDP and their agents from dealing with or according any facility required by law (regarding the gubernatorial elections to be conducted by INEC in Edo and Ondo states) to any other persons or group other than the Senator Modu Sheriff, Professor Wale Oladipo and Fatai Adeyanju-led NWC of the party

The judge directed INEC, the party and their agents to “recognise, deal with and accord all facilities required by law” to the Modu Sheriff-led NWC in the conduct of Edo and Ondo governorship elections.

Justice Abang also directed INEC and the PDP to “reject and ignore any activity (including primaries elections/congresses for the nomination of candidates of the PDP for the gubernatorial elections in Edo and Ondo states, purportedly conducted on behalf of the second defendant (PDP) by any other persons or group of persons other than the Senator Modu Sheriff, Professor Wale Oladipo and Fatai Adeyanju-led NWC.”

The judge said the interlocutory orders were to subsist, pending the determination of the substantive suit marked: FHC/ABJ/CS/439/2016 filed by two governorship aspirants of the PDP in Edo and Ondo states – Chief Benson Akingboye (Ondo) and Ehiozuwa Johnson Agbonayinma (Edo).

Justice Abang’s ruling was on a motion on notice for interlocutory orders pending the hearing and determination of the substantive suit with INEC and PDP as first and second defendants, respectively.

Before the hearing of the motion on Thursday, the judge resolved the dispute between two senior advocates, Emmanuel Ukala and Olagoke Fakunle, over who should represents the PDP in the suit.

In resolving the dispute between the two lawyers, the judge noted that while the Federal High Court in Lagos, in two separate orders on May 12 and May 20, recognised the leadership of Sheriff and restrained parties from proceeding with the party’s national convention in Port Harcourt, the Markafi leadership of the PDP emerged from a convention against which there was a pending order.

He said there was doubt about the legality of the convention from which Markafi-led Caretaker Committee emerged, while there was a subsisting order recognising the Sheriff-led NWC. The judge consequently recognised Fakunle as the lawyer for the PDP and excused Ukala from the proceedings.

Fakunle, who represented the PDP said he had filed a response to the substantive suit, but that he was not objecting the granting of interlocutory injunctions in the case.

Lawyer to INEC, T. M. Inuwa, said he would prefer to remain neutral, as his client would abide by any decision made by the court.

After listening to all the lawyers, Justice Abang granted the fourth prayer contained in the motion on notice dated June 21, 2016 and adjourned to October 25, 2016 for hearing of the substantive suit.

The plaintiffs are by the suit, asking the court to  among other prayers, determine between the Sheriff-led Committee and the Markarfi-led committee, who the legitimate leaders of the PDP  are in view of the various court orders obtained by various interests in relation to the dispute over the party’s leadership.