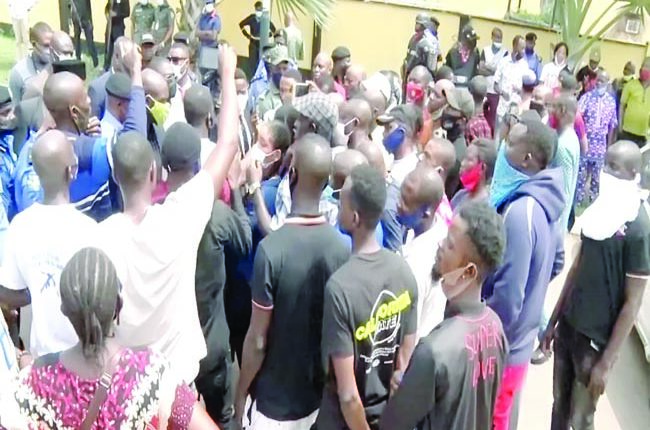 He was a man in distress. His mien, composure and psychological state of mind betrayed a man in deep agony. His look? Blank! He stared straight but was not looking at anything in particular. He was like a man in trance. The next person besides him nudged him back to life. He opened his mouth to talk and torrents of tears cascaded down his eyes. He burst into a vibrating cry, the type that shakes the entire body. Then he regained his posture and volunteered: “see as they butcher my uncle; the man who stood by us when our father died”. He wiped his tears and refused to talk again. Welcome to the agonised world of  Julius Osadebamwen, a native of Ariyan, Ovia North East Local Government Area of Edo ,whose uncle, Idemudia, was among the seven persons hacked to death in the area on Wednesday by killer herdsmen, who have made life short, brutish and nasty for residents and travellers in that locality.

Edo State in the last three weeks have become dangerous and unsafe for residents and those using the state as a gateway to other parts of the country. From the Ofosu, the boundary town on the Ondo State end, to  Okpella in the northern part of the state and a boundary town to Kogi State, the herdsmen have been operating like chickens on the free range poultry system with impunity and reckless abandon.

The situation became worse almost a month ago when the Ondo State governor, Rotimi Akeredolu, issued the directive that all illegal herders operating in the state’s  forest reserves to come and register with the state government or vacate the forests within seven days. While the directive has generated enough controversies, at the end of the ultimatum, the state’s Command of the Western States Security Network, otherwise known as Amotekun, moved into the forests to put a stamp of authority on the directive.

Chief Adetunji Olu-Adeleye, Commandant of Ondo State Amotekun, who led the operation, disclosed that quite a number of the herdsmen agreed to register and had been registered. Others who volunteered to leave the forest reserves and the state, Olu-Adeleye said, were escorted to the borders of the neighbouring states. Since Amotekun is operational in Osun and Ekiti States, which share boundaries with  Ondo, the two states that become the natural inheritors of the departing herdsmen are Kogi and Edo States.

From the Ore axis, the herders were escorted to Ofosu end of Edo state; from Owo axis, the herders were dumped at Sobe area of Owan West, Edo State, and Ibilo, Akoko Edo Local Government of Edo State, from the Akoko side of Ondo State. With no security outfit in Edo in the like of Amotekun, the herders immediately found safe haven in the state and quickly networked with their fellow Fulani criminals, who have been terrorising the entire state from all the entry and exit points.

The multiplier effects of the activities of these new arrivals, who themselves had over the years become outlaws in the state they just left, are already telling on Edo State, which, in addition to the activities of warring cult groups  various robbery gangs, now have new killer herders to contend with.

While many of the killings and kidnappings by herdsmen in Edo State have been very isolated, the Wednesday killings of seven people in a single operation by herdsmen  at Ugboke, Oshodi, Okokodo, Ariyan and Yoruba camp, in Ovia North-East Local Government Area of the state, brought to limelight again, the precarious security situation in that axis of the state. Governor Godwin Obaseki, had two weeks ago, while on a fact-finding visits to the Ovia South-West, where herders killed a farmer and injured many on their farms, had assured that his government would find a permanent solution to the herders-farmers clashes by establishing a grazing colony for herders in the state.

From  Udo, in Ovia South-West, the governor had to rush to Odighi in Ovia North-East, where four farmers were murdered by herdsmen on their farms. “Your security is my priority and concern. I will ensure that this community is secured. I am here to appeal to you to continue to maintain peace as we would not leave you alone but work together to secure the community”, the governor had assured the villagers on that occasion. That was on February 9.

Nine days later, seven persons, among whom were four farmers, were murdered by some rampaging herdsmen in the same Ovia North-East. Among the farmers, who were returning home, was Idemudia, an uncle to Julius Osadebamwen. The latest killings in that axis led to a spontaneous demonstration on Thursday as the villagers trooped out in their hundreds to protest against the incessant killings by herders in their area. One of the villagers, Janet Ighodaro, cheated death narrowly as she made her way back to Benin City for safety. She recounted how the herdsmen chose the popular Yoruba Camp in the area to launch their attacks on communities.

Some three days to the Ovia North-East killings, two kidnappers, who were responsible for the killings of two of their victims, were arrested in the Ahor area of Ovia North-East. Saturday Tribune gathered that the Edo State Police Command, acting on intelligence reports, swooped on the kidnappers, who had just kidnapped the wife of a hotelier in the Lucky Way area of Ikpoba Hill. The two  suspects,  identified as Desmond Ojo and Musa Mohammed, were said to have been responsible for the kidnapping of many persons in that axis, among whom was the Public Relations Officer of the edo State Command of the Nigeria Immigration Service (NIS), Mrs. Bridget Esele, who was kidnapped in her church premises some about three weeks ago.

They were also responsible for the kidnap of one Mrs. Chinasa Chika, whom they tied to a tree at the Ahor forest by the Benin Bye-pass.

The two kidnappers speak: “Na we carry that woman for Lucky Way. We come rob one Lexus in the morning, we snatch am. The aboki, Fulani will use bike carry the gun from inside bush come bye-pass. We go collect am, enter town. We use leg they waka and we come snatch the Lexus jeep. We come dey patrol to see anybody wey we fit kidnap. On Sunday, na him we take patrol come see the woman as we enter Lucky Way. We come drive pass and come see say the woman dey ok, na him we come reverse. We leave her daughter, carry the woman. We destroyed her phones so that dey no go fit track am. We no dey carry phone because if we sell am, Police go fit track the phone so we dey destroy am.

“The second kidnapping na the church woman, the woman wey wan enter church. As we dey come, na for Ramat na him we se am as we dey drive pass. Na him we say that woman make we follow am whether we fit see small thing from am. We follow am and she branch make she enter church, na him we come apprehend am, and carry am”, Desmond Ojo, the first kidnapper, explained their modus operandi.

Next to speak was Musa Mohammed, the go-between the kidnapping gang and the receiving Fulani herdsmen in the Ahor forest.

Hear him:”The one way we carry for Auchi Road, na that one they give us N400,000. Me no know how much the man bring come because no be me dey collect money, na this man collect money (Desmond). Na N400, 000 reach my hand and that na the first kidnap they bring come for me. The second one na this woman wey dey go church. The woman don branch wan enter church na him we block am. I follow them. When him reach junction he wan enter church na him we take block am. We know no am before. That Luck Way woman, I follow them. Na for road we see am and when we see am for road, we just carry am and when we reach bush na him vigilante enter come find am come carry am. Na two boys we give am to. The people we give am to no give us money. I no collect the woman’s phone.”

Policemen later led the two suspects to the forest where two decayed bodies of two victims were discovered and other items such as three cut-to-size guns, five expended cartridges, military camouflage, female panties, bags and wrist watches were found. They also rescued one of the women, who was tied to a tree. In the process, the kidnappers engaged the police in a gun duel and two of the criminals were shot dead.

Late Thursday evening, Ovia North-East residents stormed the Denis Osadebey Avenue Government House, Benin City, with a corpse of one of the seven victims of the killings in their area. They told Mr. Phillip Shaibu, the deputy governor, who received them, that they brought the corpse to show the governor that he needed to do more than assurance because his previous assurances had not brought any succor. Shaibu agreed that the situation was grave enough, but that not all hope is lost, saying “as a state, we have made up our mind not to lament but look for solutions on how to protect our country and our state”.

How many children should a woman have?