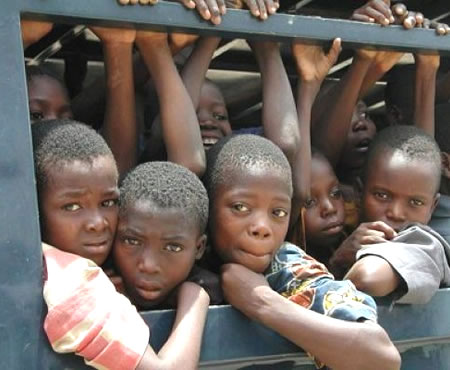 THE Edo State Government on Thursday took the campaign against human trafficking and illegal migration to some communities and schools in the state.

Speaking during the visit to Uromi, Okoduwa told the inhabitants of the various communities visited to guide their wards and children against traffickers.

He said that such traffickers took advantage of the ignorance of their victims to perpetuate the act under the false pretence of assisting them to leave better lives.

The governor’s aide urged them not to be deceived with the claim that a good job awaited them upon their arrival at their destinations.

ALSO READ: Ogun to spend N9.50bn on completion of model schools, others

“They (traffickers) do not have any job waiting for your children but rather they have a mission of engaging them in slavery while some, and especially the girls, are used for prostitution.

“The trafficker’s intention is not to better your lot or that of your children but to enrich themselves to the detriment of your family, ” he said.

The News Agency of Nigerian (NAN) reports that the team also moved to schools within the council area where they distributed notebooks supplied by the senatorial candidate of the All Progressives Congress (APC), Mr John Inegbedion, to the students.

“Our mandate and as directed by the governor is to take the advocacy to all nooks and crannies of the state.

“Gov. Obaseki is not happy with the rate of human trafficking in the state and wants it totally eradicated.

“He has mandated us to take the campaign against the activities of human traffickers from village to village, town to town, across the city centre and we’re doing that with increased speed.

“We are visiting schools because the traffickers harvest young boys and girls of school age who they can easily deceive to travel abroad, promising them heaven and earth.

“We’re here to preach the truth, nothing but the truth to them. The traffickers had a field day in the past years but never again.

“Some of the traffickers are already in our net and they will be prosecuted accordingly,’’ Okoduwa said.

Mr Austin Okoibhole, the Chairman of Esan North Local Government Area, who received the team, pledged the support of the council.

He promised to continue to do his best to improve the Technical Skills Acquisition Centre in Uromi to engage youths and harness their potential to create opportunities for them to have a better option.

Most children in Anambra Orphanage homes belong to prisoners ― Group